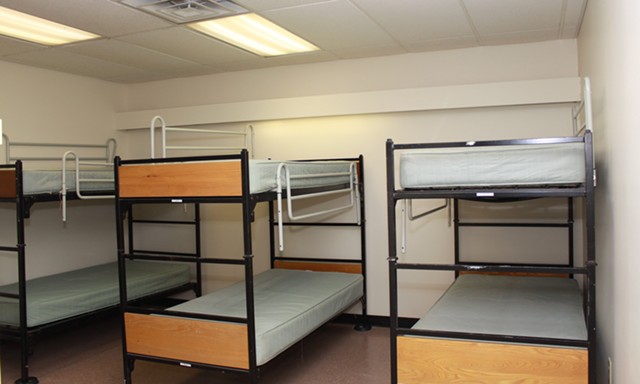 Burlington's only low-barrier homeless shelter will be under new management this winter.

ANEW Place, a transitional housing organization based on North Street, will run the low-barrier shelter on the corner of King Street and South Winooski Avenue. The 37-bed facility is open from November 1 to April 15 each year and is available to anyone. Other Queen City shelters allow only sober people to drop in, except in emergencies.

The nonprofit is taking over from the Community Health Centers of Burlington, which ran the shelter for the last three years. ANEW Place's board of directors approved the decision earlier this month.

Executive director Kevin Pounds said his organization focuses on helping the homeless find permanent housing but also recognizes that a warming shelter is "a means to an end."

"We do feel compelled to do something and not just sit by," he said, adding, "If there isn’t a low-barrier shelter in town, it’s very difficult for somebody to survive on the streets here through the winter."

CHCB staff approached ANEW Place in August about taking the reins, Pounds said. CHCB runs a homeless health care program that serves 1,500 people every year, but it couldn't manage the shelter without compromising its core health care services, according to Kim Anderson, CHCB's director of communications.

"Without having those staffing pieces in place, we realized we can’t take this on in our existing staffing structure," she said, adding, "It was maybe just a bit too much for us."

ANEW Place will be the fourth shelter steward since it first opened in 2015. The Champlain Valley Office of Economic Opportunity managed a 20-bed low-barrier shelter in February and April 2015; the Committee on Temporary Shelter then operated a 40-bed shelter downtown for a year before CHCB took over.

The effort is primarily paid for with a $300,000 state grant. This spring, the City of Burlington pitched in $60,000 to keep the shelter open until June. More than 200 homeless people used the shelter each season, according to Anderson.

Burlington Boosts Funding for Social-Service Nonprofits
Where the United Way of Northwest Vermont is cutting back, the city of Burlington is giving more.
By Katie Jickling
Economy
Anderson said "there is a certain amount of burnout" that comes from operating the winter warming shelter.

"These are really complex folks that need a lot of help, and our community certainly can help," she said. "It's just not one organization's [burden] to shoulder."

ANEW Place is working on an accelerated timeline to ensure the shelter opens on time, Pounds said. It still has to apply for the state grant and hire a slew of workers, including a full-time shelter coordinator and several overnight staff.

"There's nothing optimal about that situation," Pounds said. "We're doing six months' worth of work in six weeks to get this going."

Pounds said not much will change once ANEW Place assumes leadership. His goal is to create a "safe, supportive environment" for the people who need services.

"These are our neighbors. They're people that matter," Pounds said. "It does make our community a better place for everyone [by] making sure they’re cared for."
Prev
Next