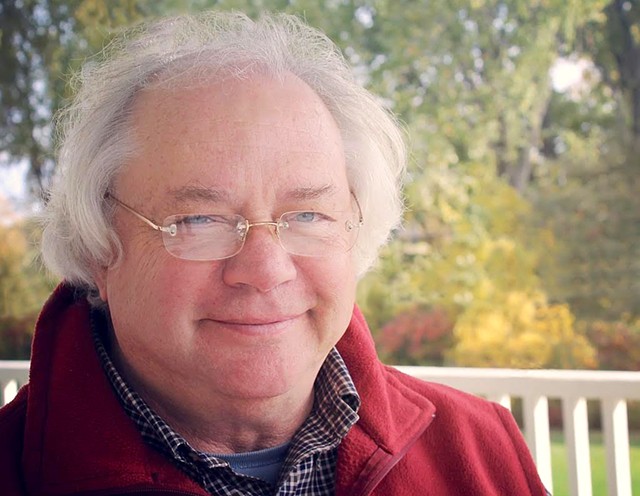 The first and only executive director of Preservation Trust of Vermont, Bruhn, who was 72, had battled poor health in recent years. “It was his heart that finally couldn’t keep up with him,” his obituary reports.

Bruhn lived in South Burlington. Among his many survivors is his partner, Colleen O’Neill, of Cornish, N.H.

“I can’t think of anybody who’s been more important to the fabric of life in Vermont over the last 40 years than Paul,” said Candace Page, a veteran journalist and a consulting editor at Seven Days who attended Burlington High School with Bruhn in the 1960s. The two remained close friends until Bruhn’s death.

With his well-reasoned, matter-of-fact manner and professorial, friendly countenance, Bruhn was beloved by those fighting to maintain Vermont’s small-town charm. He was also respected — and feared — by the developers who sought to alter it.

A fount of information about Vermont history and a range of other topics, Bruhn was also articulate and eminently quotable, qualities that made him a sought-after source for reporters.

He was known to crisscross the state, helping communities and village centers maintain their historic features. Bruhn saved general stores, churches and grange halls, and did his best to fight suburban sprawl.

He acted as an unofficial mediator between local officials and Walmart when the mega-retailer sought to establish a presence in Vermont during the 1990s. Rather than flat-out oppose the big box store, Bruhn focused on compromise. Walmart eventually opened a store in Bennington, finally giving the retailer a store in every U.S. state.

“You cannot drive through Vermont without seeing and experiencing Paul’s handiwork,” said Neale Lunderville, Preservation Trust’s board chair. “It happened in places large and small. Paul believed that Vermont was this truly special place and a place that was worth protecting and saving for future generations.”

Related Our Towns: Can Rural Vermont Communities Survive in the Age of Amazon and Act 46?

Our Towns: Can Rural Vermont Communities Survive in the Age of Amazon and Act 46?
Vermont's rural towns are facing multiple challenges — a declining birth rate, closing general stores, school consolidation. Seven Days explores the problems, and how communities are responding, in this special report that spans the state.
By Paula Routly
Our Towns
Bruhn was a close friend of Sen. Patrick Leahy (D-Vt.) and his wife, Marcelle. In 1974, Leahy recruited Bruhn to help run his first U.S. Senate campaign. The senator later brought him to Washington, D.C., as his chief of staff. Bruhn returned to Vermont in 1978.

In a written statement Friday, Leahy called Bruhn “one of the finest Vermonters I ever worked with, and one of the dearest and best friends we have both had, and we loved him.

“His work on historic preservation is equal to the work that anyone has ever done for the State of Vermont,” Leahy wrote. “Those countless success stories are preserved in brick, mortar, stone and wood across our state.”

Lunderville has been on the Preservation Trust of Vermont board since 2011, but he first met Bruhn in 2003. Lunderville had just run Republican Jim Douglas’ successful campaign for governor when late Seven Days columnist Peter Freyne suggested that the young political operative meet Bruhn. They quickly became fast friends.

“Our politics weren’t always the same, but we shared a deep and abiding love for Vermont,” Lunderville said. “We both liked to laugh and think about the future.”

Bruhn was a tireless worker until the day he died, Lunderville said. He recalled Bruhn leading various conservation groups in an effort to raise money to buy land to stop a development project planned for Interstate 89 exit 4 in Randolph.

Environmental Groups Raise Cash to Purchase Exit 4 Land
By Katie Jickling
Off Message
“It was on a very tight timeline, which was sort of a Paul trademark: ‘We have to raise $1 million and we have 30 days,’ something completely outlandish,” Lunderville said with a laugh. But Bruhn's "indefatigable spirit" led him to rally the troops. "He did it!" Lunderville exclaimed.

One thing was still missing, Lunderville recalled. The planned development had forced sculptor Jim Sardonis to move his iconic whales' tails project from Randolph to a field alongside Interstate 89 in South Burlington in 1999. So Sardonis, with backing from Bruhn, built a similar sculpture and recently unveiled it at the Randolph exit in July.

A smiling Bruhn, seated in a wheelchair, attended the ceremony on the land he'd help preserve.

“You can just imagine the whales underwater, snuggling up and dancing,” Bruhn told a Seven Days reporter at the event. “Most days, I have the best job in Vermont. And today is a great example of why.”

Correction, September 23, 2019: A previous version of this story misidentified the town where Walmart first opened in Vermont.
Prev
Next