Weinberger: Burlington Aims for Zero Fossil Fuel Use by 2030 | Off Message

Weinberger: Burlington Aims for Zero Fossil Fuel Use by 2030 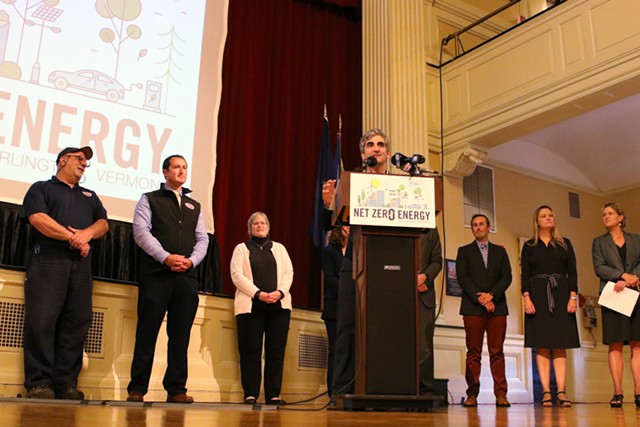 The City of Burlington launched more than a dozen energy-efficiency programs Monday as part of its ambitious plan to achieve net-zero energy consumption by 2030.

Mayor Miro Weinberger introduced the “Net Zero Energy Roadmap” to a packed City Hall, telling the crowd that Burlington can “show the country that another future is possible.”

The roadmap lays out four ways to get there. According to the plan, Burlington can reduce 60 percent of its dependence on fossil fuels by encouraging Burlington Electric Department customers to switch to electric heat. It can shave off another 20 percent if drivers transition to fully electric or hybrid vehicles.

An additional 15 percent would be cut once Burlington installs a district energy system, which would capture steam from the Joseph C. McNeil Generating Station to provide heat for large energy customers such as the University of Vermont Medical Center. The final 5 percent could be achieved by drivers choosing alternative modes of transportation, according to the plan.

In all, the roadmap calls for the city to use 65 percent more renewable electric energy to meet the 2030 goal. The plan was a cornerstone of Weinberger's 2019 State of the City address, when he called it "the most ambitious climate goal of any city in America."

Weinberger Prioritizes Climate Change, Housing in State of the City
By Katie Jickling
Off Message
“Today I am calling on all Burlingtonians, residents and business owners to join city government in committing to achieve this net-zero energy goal,” Weinberger said Monday, noting that all must consider electric “every time they are making a heating, building or transportation investment in the city.”

BED is offering numerous incentives for customers who go electric, such as the Net Zero Energy Home Program, which offers up to $2,250 to residential natural gas customers who install a home heat pump.

To reduce transportation-related fossil fuel use, the city-owned electric utility will give $800 to customers who purchase a pre-owned electric vehicle or plug-in hybrid, an extension of an existing program that offers up to $1,200 for new or leased EVs. There are even rebates for electric forklifts and lawn mowers.

The city also plans to install 20 more EV charging stations over the next year, adding to the existing stock of 14, Springer said.

Burlington's 34-Year-Old District Energy Plan Is Gathering Steam
By Katie Jickling
Environment
Burlington Electric Commission chair Gabrielle Stebbins said the march toward net zero is needed to protect “our future,” a nod to the dozens of fourth-graders from Edmunds Elementary School who attended the event. Stebbins said her fourth-grade daughter is frequently alarmed by what she sees on the news, such as the fires in the Amazon rainforest.

“That behooves us to look inward and at our own communities. And so we're doing that,” Stebbins said.

“This is really hard stuff, and it's really hard by 2030, but we've gotta do this,” she continued. “We have one choice. We can do it when we're ready and planning, or we can wait until these kids are 12 years older.”

Fourth-graders Graham McNeil, great-grandson of the McNeil plant’s namesake, and Kaya Rubin also took to the podium to speak to the plan’s importance to great applause from their peers.

The roadmap notably does not include cutting fossil fuel use by the Burlington International Airport, which is based in South Burlington but is Burlington owned and operated.

“That is clearly an important area of ultimately getting to where we need to get as a society,” Weinberger said. “That is an answer that cannot continue to be neglected and ignored by the federal government."

The comments provoked eye rolls from about half a dozen anti-F-35 protesters, who arrived ahead of the press conference and stood silently next to the podium as officials spoke. Some held signs that questioned the climate-friendliness of the fighter jets.

The F-35s are due to arrive at the Vermont Air National Guard Base at BTV sometime this month.

The Burlington City Council was expected to hear more about the city’s net zero goals at its Monday night meeting.
Prev
Next