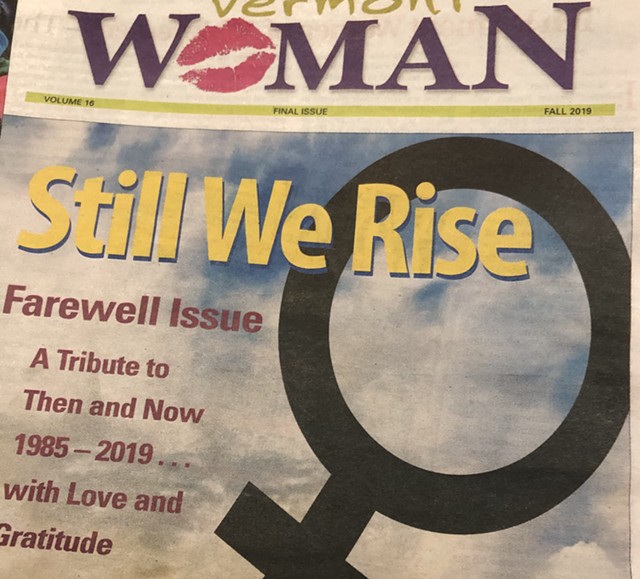 Vermont Woman, a newspaper founded 34 years ago that rejected stale stereotypes about what constituted women's issues, has published its final edition and is for sale.

"Letting go is tough. Anytime a newspaper closes, the community it served loses," publisher Suzanne Gillis wrote in the farewell issue that hit newsstands on September 6.

The tribute examines the paper's legacy of reporting on news, arts and the politics of everything from reproductive rights to feminism.

"We did not cover fashion, diets or hairdos," Gillis wrote. As the publication sought to shine a spotlight on the inequities facing women, it rarely included men's viewpoints because, Gillis explained, "they were massively covered in the dominant male-owned and -staffed media."

The goodbye includes a note that the paper is for sale for an unspecified price.

Reached by phone Monday, Gillis, 74, of South Hero, said she's ready to "get off the stage" and believes the right buyer can refresh and grow the periodical.

"I hope I can find somebody to take it on," she said. "There's such a need for the voice in my opinion."

Vermont Woman endorsed political candidates, covered state politics and hosted a lecture series that brought notables such as Ann Richards, Gloria Steinem and Helen Thomas to the state. The publication won honors, including the New England Newspaper of the Year award in 2007.

The award brought Gillis to tears, she wrote: "I wept for women everywhere as they are so rarely acknowledged for excellence."

In 2010, Gillis was inducted into the New England Newspaper Hall of Fame.

The newspaper began as a monthly and eventually published just five issues a year. Leading up to the final edition, there were no full-time staff positions and the paper was produced by part-time and freelance editors, writers, production and sales people, Gillis said.

This is not its first goodbye.

The newspaper was first published in 1985, and in 1990 merged with the Vanguard Press to create the Vermont Times, which Gillis sold in 1994, according to the Vermont Woman website.

Gillis brought Vermont Woman back into print in 2003.

The final issue includes first-person stories by editors and writers about the history of the publication, along with a story titled, "A Short History of Lesbian Feminism in Vermont."

Revenues at the publication have gone up and down, but the operation pays for itself and has no debt, Gillis said.

"We have always been able to pay our bills," she said. "Did it make us rich? It certainly did not."

Still, she believes a new owner could bring the paper back to life and grow it.

"With the right fit," Gillis said, "the business model is there."
Prev
Next