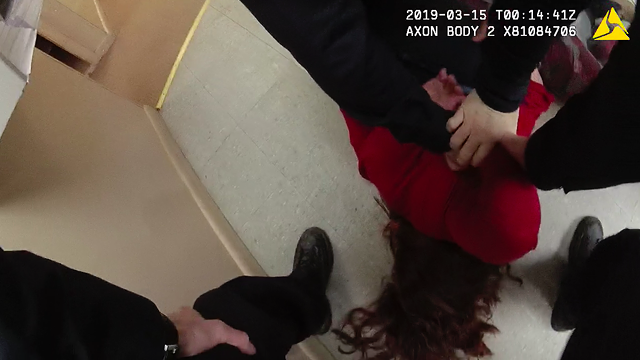 The Franklin County Sheriff's Office said Wednesday that its newly hired deputy didn't know his former colleague at the St. Albans Police Department had punched a handcuffed woman in the eye at a scene where both were present.

Michael Ferguson was one of two St. Albans police officers seen on body camera video that captured their former supervisor Jason Lawton roughing up the woman in a holding cell last March. Ferguson resigned from the department in June, the day after the police chief ordered an internal investigation into the incident. Lawton, a sergeant, was later fired, and the third officer, Zachary Koch, was suspended without pay for an unspecified period because he failed to report Lawton's misconduct.

Sheriff Unwittingly Hired St. Albans Officer Involved in Brutality Incident
By Derek Brouwer
Off Message
But the Franklin County Sheriff's Office, which hired Ferguson in July as a full-time deputy assigned to court security, was unaware of the excessive force probe, or that Ferguson had resigned amid it, until Seven Days and other news outlets published the body cam footage last week.

Ferguson's new employer placed him on administrative leave last week while it assessed his involvement in the case.

"Ferguson was in the other room on the phone when the incident started and entered the room where the holding cell is located after the punch was thrown and as Connelly was being removed from the cell," the office wrote in a press release. "Ferguson then assisted the other officers as Connelly was placed on the floor."

Beating of Handcuffed Woman Leads to More Fallout for St. Albans Cops
By Sasha Goldstein
Off Message
Ferguson told the sheriff's office that he believed Connelly's eye had been injured at the St. Albans bar where he and other officers arrested her earlier in the night.

Moreover, the sheriff's office said Ferguson was not in fact a subject of the St. Albans chief's internal investigation when he resigned in June.

"The facts and circumstances related to the Deputy's resignation are not related to allegations of potential involvement in the matter involving Connelly," the press release states.

See the video below: