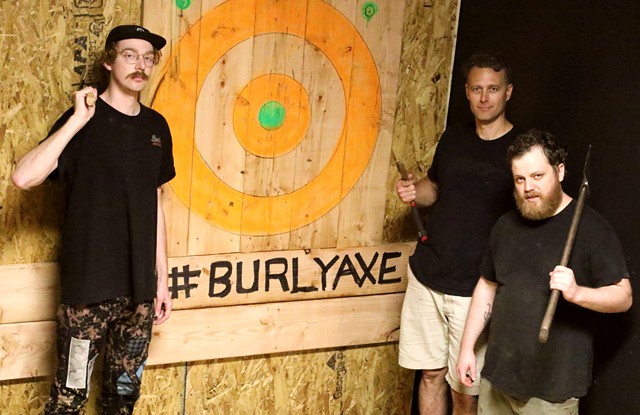 Burlington entrepreneur Mike Garber has an axe to grind: There aren’t enough places to have good, clean fun in the Queen City. So he’s opening one of his own.

By sometime next month, Garber hopes to have Burly Axe Throwing, a competitive axe throwing venue, up and operating at 294 North Winooski Avenue.

Participants chuck two-pound axes — really more like hatchets — at a bullseye painted on a wooden wall to earn the most points.

“It’s a lot like darts,” Garber said. “It sort of gives you the feeling of danger, but it’s under control.”

Burly Axe’s 1,500-square-foot space is a converted garage bay formerly occupied by Off Center for the Dramatic Arts, which is moving to a suite next door. Garber is right in the middle of the fit-up, but when it's done, the venue will feature eight lanes. Axe throwers stand between 12 and 15 feet from the target, and staff will be on hand to ensure safety, proper grip and stance, Garber said.

A Burlington native, Garber wanted to capitalize on the axe throwing trend before someone else did. Once he came up with the name, it was a done deal, Garber said.

"Burly," a nickname for Burlington, also conjures up an image of a bearded, flannel-wearing dude who likes a good craft beer, Garber said. And though there are plenty of those in Burlington, axe throwing is for anyone, he said.

Garber also operates Esc4pe Reality Games escape rooms on College Street, another trend that started about 10 years ago but only recently arrived in Vermont; he opened the three-room venue in 2016. Both activities are indoor recreation that don’t require any equipment, though axe throwing is “a little less cerebral, a little more primal,” Garber said.

Unlocking the Queen City's Latest Craze: Escape
By Sarah Tuff Dunn
Culture
He doesn't know of any similar venues in Vermont, but the activity has quite a following. The National Axe Throwing Federation counts members in 75 cities and eight countries worldwide. The World Axe Throwing League Championship is broadcast on ESPN3.

The operation is considered a health club under Burlington’s zoning rules, according to Burlington planning technician Layne Darfler. As much as Garber hates the comparison, he said axe throwing “is like the new bowling.”

And just like bowling, people at other clubs have formed axe throwing leagues. Garber can imagine the same happening at Burly Axe. He also plans to seek a liquor license and serve snacks.

There are still some details to figure out — what the age requirement will be, for one — but overall, Garber is excited to bring something new to an Old North End neighborhood.

“It’s exciting to be down there in that vibrant area where things are happening,” he said.
Prev
Next