CityPlace Architect Says Mall Project Will Be Redesigned | Off Message 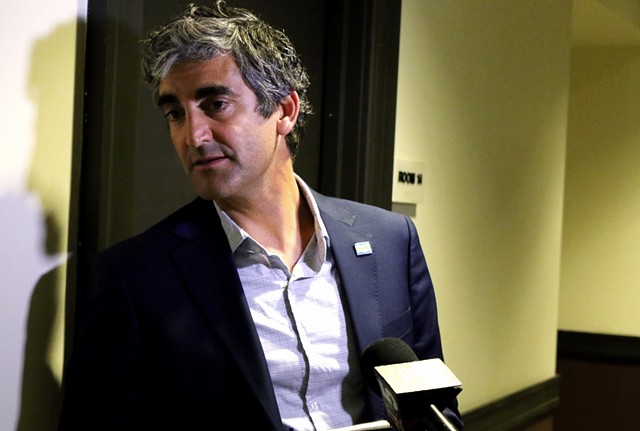 A consulting architect was a bit chattier, however.

Within earshot of the press corps, Fellows wondered aloud if the resulting delays could affect either the city’s plans to use tax-increment financing dollars to support the project or the signed lease with the anchor tenant, the University of Vermont Medical Center. He then left City Hall with a cell phone to his ear.

Neither Glassberg nor Mayor Miro Weinberger would divulge what’s next for CityPlace, saying they have to defer to developer Brookfield Asset Management, whose representatives did not attend Monday’s meeting.


"There's lots of people who are waiting for the word on this,” Glassberg said. “It's not our word to give."

“I'm looking forward to sharing considerable additional thoughts with you once Brookfield has explained what is, I think, self-evident — that we're in mid-July and this project's not in construction,” he said.

Glassberg told Seven Days as much in an interview last week. He also pointed out that Brookfield is approaching a December 31 deadline to submit a construction contract, as per the October 2017 development agreement. That agreement can be renegotiated, but as of now, Brookfield isn’t poised to meet that mark, Glassberg said.

Related Burlington Expected to Update Public on CityPlace Next Week

Burlington Expected to Update Public on CityPlace Next Week
By Courtney Lamdin
Off Message
If the document isn’t finalized by June 2021, the city will lose out on $22 million in TIF funding for infrastructure improvements, which Fellows alluded to in his hallway conversation.

The city and Brookfield now plan to release a statement about the project status “in concert” sometime later this week, Glassberg said.

It will be the first public update in the three months since Will Voegele, Brookfield’s senior vice president of development, told the council that Brookfield was tabulating construction bids. He said the firm was “absolutely” committed to the project.

Asked by a reporter how he’d characterize the impending announcement, Glassberg said: “Change.”

“A change from the status quo,” he continued. “There's no construction under way. Our effort is to get construction going and trying to figure out the shortest path to get there.”

Former city councilor Dave Hartnett didn’t seem convinced. He was one of two councilors who voted last August against letting Sinex obtain a foundation permit without proof of project financing.

As long as Sinex is involved, there will be no progress, Hartnett said, adding he hopes the project is redesigned.

“We gotta do something quickly,” he said.
Prev
Next