Burlington's City Hall Park was closed Wednesday morning as the city gears up for a major renovation of the two-acre green space.

Crews erected a chain link fence around the perimeter to secure the site for a redevelopment project that is expected to last until next fall. Plans call for realigned pathways, a new fountain, rain gardens, 1,500 perennial plants and grasses, and extra seating.

“Our park will get so much more use,” said Cindi Wight, director of the Burlington Parks, Recreation & Waterfront Department. “It will be a welcoming place.”

As soon as next week, the city will begin removing benches and trash cans and remediating compacted soils, Wight said.

That’s concerning to Jimmy Leas, a South Burlington attorney representing a group of citizens who sued the city in March over the project's financing and other issues. On Monday, Leas filed an amended complaint that alleges the city’s own zoning permit for the renovation has expired.

He pointed to the Development Review Board’s stipulation that the permit would become invalid unless “work or action authorized by the permit” started by March 22, 2019.

“The city hasn’t done anything,” Leas said. “It hasn’t even done remedial action in the park in all this time.”

Leas is concerned that without a court-ordered injunction — and fast — Burlington’s historic park could be irreparably damaged.

“The city is running rampant over its own regulations,” he said. “It needs to be reined in and be required to do whatever any other developer has to do.”

Vermont Superior Court Judge Helen Toor gave the city until July 16 to respond to the amended complaint. Until then, City Attorney Eileen Blackwood would only say that the city disagrees with the opponents’ interpretation of the zoning permit rules.

The project will continue because “there is no court order telling the city to stop,” she said.

“The permit remains in effect and is completely valid,” Blackwood added. “The city has a right to go forward under it.”

Plans originally called for the removal of 38 trees, which mobilized a group called Keep the Park Green to protest the project design last spring. But the city ultimately altered the plans so that the park will only lose three total trees of 51 currently there. Most of the trees in poor condition will be removed and replaced, according to Wight.

Despite the ongoing conflict, things were calm at the park on Wednesday morning. Police officers and park employees stood guard just in case things got out of a hand, but authorities reported nothing amiss.

Laura Wheelock, a senior engineer with the city Department of Public Works, attributed that to the city’s efforts handing out fliers on Tuesday notifying people of the park’s impending closure. 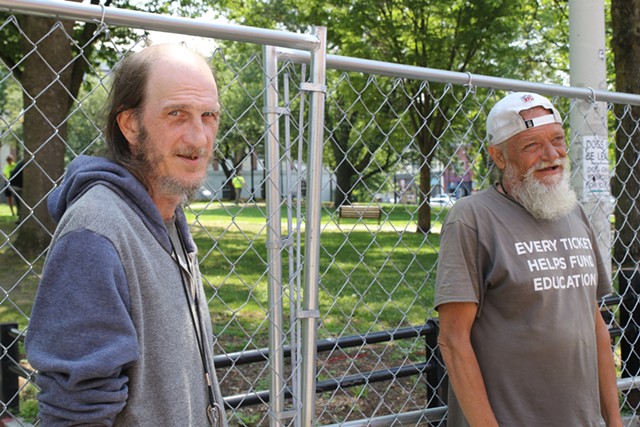 “Generally, it was very well received,” Wheelock said, noting only a few folks were unaware the park was closing at all. “They appreciated the information.”

Nearby, three onlookers observed the scene. They lamented losing their hangout spot but agreed the park needs a makeover. One in the group, Bob Kennedy, said he was pleased to hear that loss of trees will be minimal.

Opponents of Burlington City Hall Park Redesign Speak for the Trees
By Katie Jickling
Off Message
One of Kennedy’s pals, Robert Sawyer, said the park redesign “doesn’t affect me or my life.” His other buddy, Jamie Bove, suggested it might affect others, though, such as people looking for a lunch spot or folks walking dogs.

“Look how many dogs there are in Burlington,” Bove said just as a woman with a fluffy pooch walked by. “Where are they going to go? Not everybody’s gonna go to the waterfront just to walk their dog, let me assure you this.”

Wight, the parks director, said she hopes parts of the park could reopen before next fall. She’s excited that construction will finally begin eight years after the project was first envisioned.

“It’s just going to be a beautiful place for the community,” she said.

For his part, Leas hopes the judge hears his clients' pleas before demolition really gets underway.

"Hopefully we’ll get some kind of answer," he said.

Read the full complaint below: