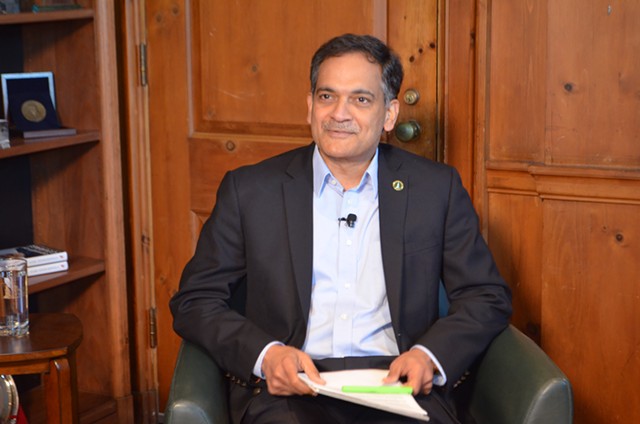 "I will work tirelessly to take UVM to an even better place," Garimella said during a press conference his first day on the job.

Unpacked boxes lined the hallway leading to his office in the Waterman Building in Burlington, where more than a dozen journalists gathered for a meet-and-greet with the president of Vermont's state university and largest institution of higher education.

Wearing a UVM pin on the lapel of his blue blazer, Garimella said he would focus on helping students succeed in a world where their education should evolve beyond what the generation before them received.

Even before he officially started the job, Garimella said, he met with students in the cafeterias and hallways. He wants to continue that.

"I'm very anxious to get to know the students better," he said, adding: "I hope that they see they can approach me anytime."

Garimella praised his predecessor, Tom Sullivan, for making the transition easy and for leaving the university in good shape.

He acknowledged the challenges in higher education with the numbers of high school grads in the Northeast declining and three Vermont colleges closing this year, but said UVM is well positioned to "weather the storm."

Asked what drew him to UVM, Garimella joked about the weather. "I'm told that it's always like this," he said, eliciting laughter as bright sunshine beamed through the windows on a perfect July morning.

On a more serious note, Garimella said UVM's status as a land grant institution appealed to him. Land grant schools grew out of a movement in the late 1880s to help the working class get an education.

"I'm a product of public schooling. I don't come from means," said Garimella. Everyone should have the kinds of opportunities he's had, he said.

He went onto praise his first-grade teacher in Bhopal, India, who told him he could do anything. He also praised his father, an engineer, and his mother, a homemaker. Both emphasized the value of education, he said.

Asked about his interests, Garimella said he enjoys cycling, walking and gardening. But he ventured that it might be awkward to indulge his hobby of growing vegetables and tending roses at Englesby House, the carefully landscaped president's mansion where he and his wife now live on South Williams and College streets. The couple has two college-age children.

Over the last two years, UVM students have pushed for more diverse faculty, more inclusive curriculum and other goals around race and ethnicity. Asked about the protests, Garimella said everyone at UVM should feel welcomed and that he expects to continue to work toward diversity goals.

The activism on campus reflects an engaged community, he added.

"I see it as a plus," Garimella said.

He was hired as UVM's 27th president in February. The senior administrator and mechanical engineering professor at Indiana's Purdue University had been the sole finalist for the job to succeed Sullivan.

Garimella's contract at UVM gives him total compensation of more than half a million dollars annually. He has a base salary of $480,000 and an additional $50,000 annually in deferred compensation for each year he stays on the job.

Garimella will also receive a $100,000 annual payment toward a retirement fund, according to the contract.
Prev
Next