'Billboards' Around CityPlace Construction Site Taken Down | Off Message 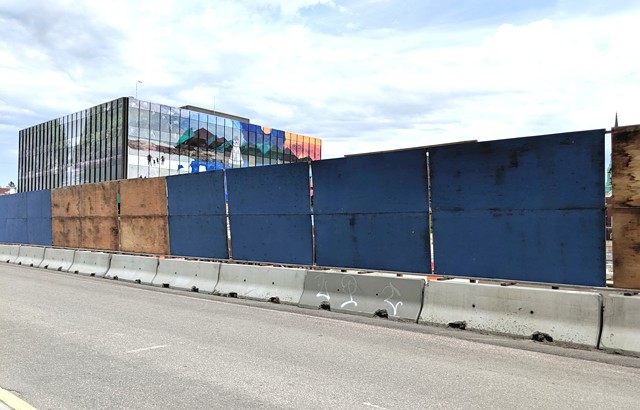 The 61 billboard-esque signs surrounding the downtown hole formerly known as Burlington Town Center were removed Wednesday afternoon — the only work at the stalled CityPlace development in almost a year.

Crews removed the 8-by-10-foot advertisements along Cherry and Bank streets, revealing boards, some graffitied, that shield the pit from public view. Combined, the signs measured 2,880 square feet, far exceeding the 150-square-foot allowance in Vermont’s billboard law, which was enacted in 1968, Seven Days reported last fall. The signs had been installed as part of an October 2017 development agreement with the city.

Do the Signs Around CityPlace Construction Site Violate Billboard Law?
By Sally Pollak
WTF
Representatives from project owner Brookfield Asset Management had told attendees at the Wards 2 and 3 Neighborhood Planning Assembly meeting last week that the signs would be coming down soon. Will Voegele, Brookfield’s senior vice president of development, said the concern over billboards was “not lost on us.”

“We’ve heard it before,” he said, “and we’ve just recently come to agreement that it’s time for them to come down.”

The room erupted in applause.

John Franco, the attorney representing a group of citizens opposed to aspects of the project, welcomed the news. He had filed a motion on their behalf on May 22 asking a judge to rule that the signs violate the billboard law and Burlington’s zoning ordinances. Brookfield took them down before the judge ruled on the motion, Franco said.

“Brookfield did the right thing," Franco said. "We thank them for it, and hopefully we're turning a new page here."

Don Sinex, the developer, did not immediately respond to a request for comment. He told Seven Days last fall that it was “simplistic and misleading” to compare the signs to billboards. But several attorneys agreed the signs likely did run afoul of the law. The 50-year-old statute forbids such signs in the public right-of-way.

“There is no authority to grant variances from this,” John Dunleavy, a now-retired assistant attorney general, said at the time.

Burlington city attorney Eileen Blackwood had said the city disagreed with the state’s assessment and called the billboards “temporary construction signs.” She did not immediately return a call seeking comment Wednesday afternoon.

Signs or no, there is still no date for construction to commence. Voegele told the audience last week that Brookfield was still crunching numbers from the bid process, a prerequisite for building.

"I understand how difficult it is that there's a hole in the ground over there with barriers around it, and believe me, we have a huge investment here," Voegele said. "We get it. We would rather simply be over there pushing dirt around right now. So this isn't the position we want to be in, but it is sometimes what has to happen with big, complicated developments."
Prev
Next