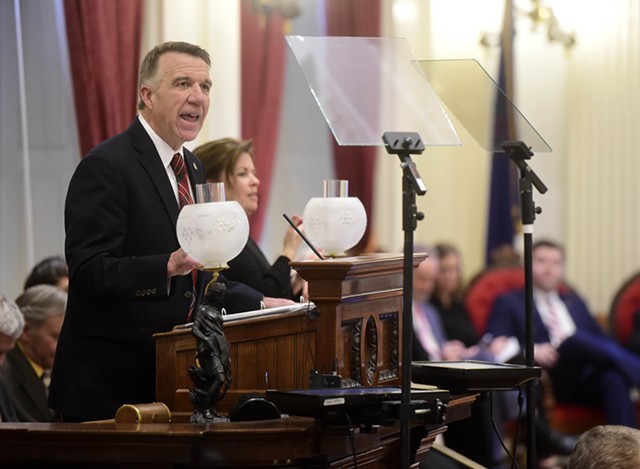 Scott said he was “at a loss as to the logic or strategy” behind the decision by Chittenden County State's Attorney Sarah George not to prosecute the defendants in the three cases, all of whom claimed they were insane at the time of their crimes.

“These cases are among the most violent crimes committed in Vermont in recent memory, and with their dismissal, there is no longer a possibility of supervision by the Department of Corrections or conditions of release to protect Vermonters,” Scott wrote in his letter.

In an interview with Seven Days Thursday, George pushed back on the governor’s critique.

“It always frustrates me when individuals make statements about a decision I’ve made without all the facts,” George said, adding that she did not know if the governor had read her press releases or the court documents outlining her rationale for the dismissals.

“This was not an easy decision,” George said. “This was not something I took lightly. This is something I lost a lot of sleep over. And I would never have done it if I felt like there was another option."

Nevertheless, since public safety concerns have been raised, both by the dismissals and the governor’s letter, Donovan said, it’s his responsibility, as both the state’s top law enforcement officer and counsel for the Department of Mental Health to ensure that the public trusts how such cases are handled.

“There are no easy answers on this,” Donovan said. “The fact of the matter is, we have a problem, so let’s solve it.”

George announced on Tuesday that she was dropping charges in the three cases because she had no evidence to refute defense claims that the defendants were insane.

"On the heels of these decisions, the State must do everything within its power and jurisdiction to ensure the safety of Burlingtonians and prevent these individuals from returning to our streets and neighborhoods," Weinberger wrote in his statement.

Scott noted that the Department of Mental Health “has no legal authority to continue to keep individuals hospitalized” when they no longer meet the legal standard of needing hospital care, and suggested the public might be endangered by the decisions.

“The top priority of government is public safety, and I certainly don't take this obligation lightly,” Scott said. “A civil society cannot function properly when a heinous violent crime is not properly adjudicated, and the public is put at risk."

George said she had spoken previously with Donovan, her predecessor as Chittenden County’s top prosecutor, and “he was aware of these cases and decision we were facing.”

“I certainly can understand if the AG wants to review these cases,” George said. “he is of course, welcome to do that; it is within his jurisdiction.”