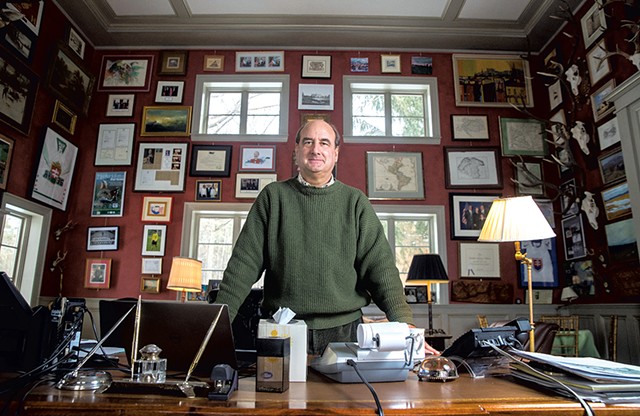 A federal judge ruled this week that a spokesperson for U.S. Sen. Bernie Sanders (I-Vt.) does not have to comply with a subpoena issued as part of a class-action lawsuit against Vermont gasoline retailers accused of price-fixing.

A defendant in the suit, R.L. Vallee, sought last November to compel the aide, Daniel McLean, to turn over a wide range of legislative, legal and political documents involving Sanders' Senate office. R.L. Vallee, which operates the Maplefields chain of gas stations, later alleged in a court filing that the documents were necessary to show that the senator had ginned up the lawsuit to exact retribution against the company's CEO, Rodolphe "Skip" Vallee, a longtime political nemesis of Sanders'.

A lawyer for McLean, who was represented by the Office of Senate Legal Counsel, argued at an April hearing that he was shielded from the subpoena by the doctrine of sovereign immunity, which generally protects the federal government from being sued. McLean's attorney also argued that the speech and debate clause of the U.S. Constitution protect most congressional documents from disclosure, and he said that the subpoena would impose an undue burden on Sanders' office.

R.L. Vallee's attorney, Tristram Coffin, argued that the alleged acts of political retribution would not constitute official Senate business and, therefore, should not be covered by such protections.

Vallee Accuses Sanders of Seeking Legal Retribution 'To Make a Point'
By Paul Heintz
Off Message
In Tuesday's ruling, Sessions mostly sidestepped the question of whether McLean was protected by sovereign immunity, writing that it "remains unsettled" whether the doctrine could be applied to a private-party subpoena. The judge argued that it was unnecessary to answer that question because he agreed with McLean's other two arguments.

Sessions noted that Sanders "has for several years been inquiring into gasoline pricing and gasoline competition in Vermont" and that McLean's work related to legitimate legislative activity protected by the speech and debate clause. Because courts have interpreted those protections broadly, Sessions wrote, "even if Senator Sanders was motivated by animosity to engage in core legislative activities, his motives cannot be questioned."

Further, Sessions ruled, R.L. Vallee's subpoena was "not only unduly burdensome but also, in some instances, of questionable relevance." Among the 30 categories of documents the company requested were ones related to potential 2012 and 2018 Senate candidacies of Skip Vallee and former Republican governor Jim Douglas.

In a written statement provided by Coffin, Vallee said he planned to appeal the decision. "It is not the proper role of a Senator to urge the Vermont Attorney General to prosecute a case just to make a point," Vallee said in the statement.

That was a reference to a document obtained in the course of the price-fixing lawsuit suggesting that Sanders had sought to convince the Vermont Attorney General's Office to investigate Vallee's company a week after the CEO released a television advertisement attacking the senator. According to handwritten notes taken by Assistant Attorney General Ryan Kriger at a September 2014 meeting, either Sanders or McLean suggested that the AG should "Bring [a] case just to make a point."

The AG's office did not end up doing so, but following months of correspondence with McLean, two law firms filed a $100 million class-action lawsuit in state court accusing R.L. Vallee and three other companies of engaging in price-fixing. The companies have maintained their innocence.

McLean and Sanders, who have not publicly weighed in on the subpoena, declined to comment Wednesday.
Prev
Next