Gov. Phil Scott and former Wisconsin governor Scott Walker headlined a Thursday evening fundraiser for the Vermont Republican Party. About 160 people attended the dinner at the Hilton Burlington. (Twenty or so of them paid extra for a closed-door reception with the two governors.) Before the event, roughly 500 people held a protest across Battery Street from the hotel.

Scott has sought to distance himself politically from Walker, who pursued conservative, anti-union policies as governor. “I didn’t invite the speaker,” Scott said at a Thursday press conference in Waterbury. “But I felt an obligation to make sure that we welcome governor Walker to our state.

“Vermonters know me,” Scott added. “I’m a centrist and I’m open-minded and I’m willing to listen to other points of view, and that should be the message here.”

During the fundraiser, Scott and Walker sought to minimize their political differences. Scott thanked Walker “for coming here from America’s second-best state for cheese,” and spoke of their common hobby of motorcycling. He then spooled off his usual stump speech, emphasizing affordability and growing the economy — not mentioning issues such as abortion, marriage equality and union organizing rights, on which the two men differ.

Walker quoted a remark by former president Ronald Reagan: "What do you call someone who agrees with you 80 percent of the time? An ally." Walker praised Scott's efforts at imposing fiscal discipline in Vermont. But his speech clearly defined him as much more conservative than his host.

Walker slammed Sen. Bernie Sanders (I-Vt.) even as he predicted Sanders would be the Democratic presidential nominee. He claimed there is no difference between the democratic socialism espoused by Sanders and the socialism of the failed state of Venezuela. "We can never let that happen in America," Walker said. "We were born free, we must remain free."

The former governor compared wealth taxes proposed by Sanders and Sen. Elizabeth Warren (D-Mass.) to redistribution of grades. "It's like a young woman who gets all A's having to give away some of her grades" to others who didn't fare so well, he said. The comparison assumes every dollar was earned fair and square, and ignores the inherent advantages of wealth — especially when it's inherited.

While the two men did their best to ignore or minimize their differences, the protesters outside sought to tie them together. Many brandished signs referring to “Phil Scott-Walker.” The protest was organized by several labor unions and progressive groups including Rights & Democracy. 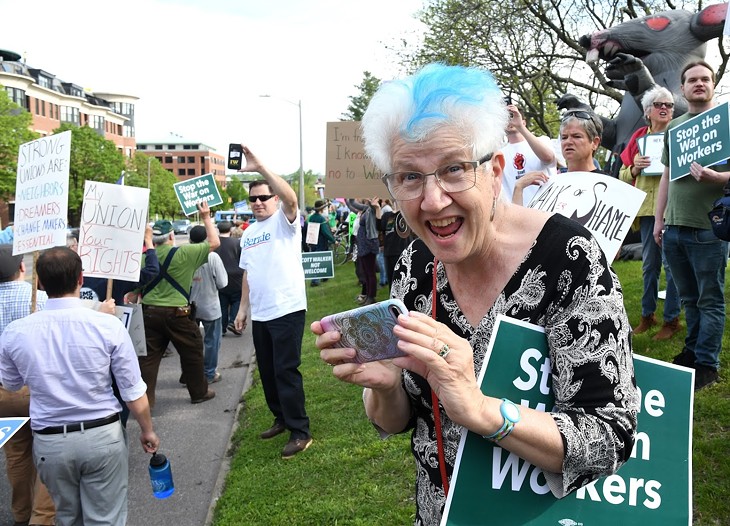 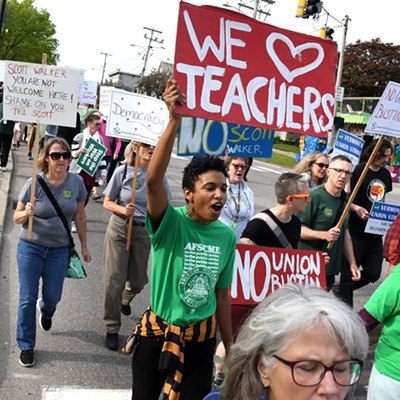 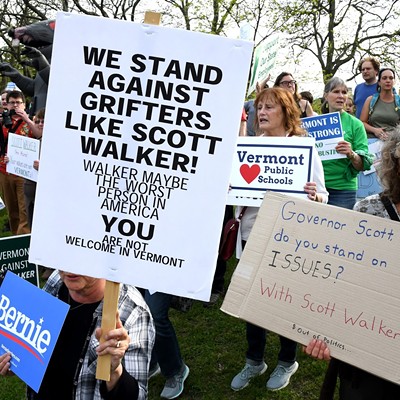 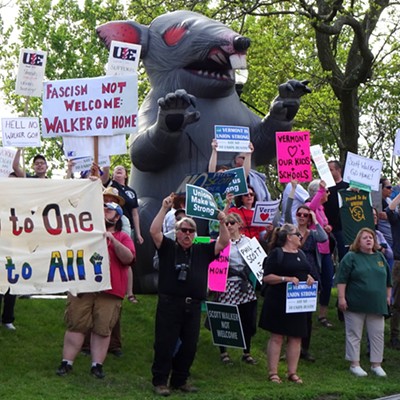 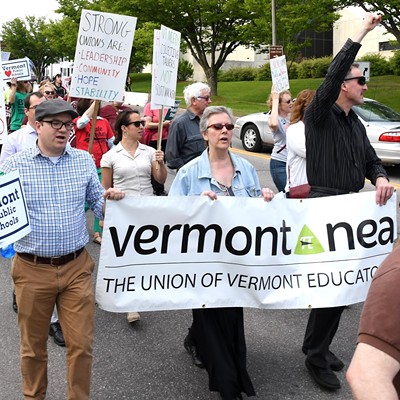 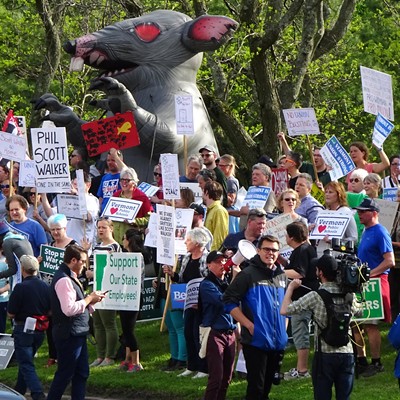 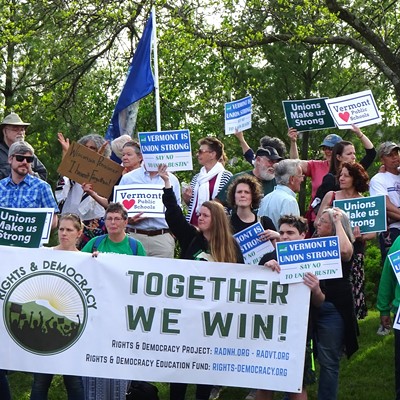 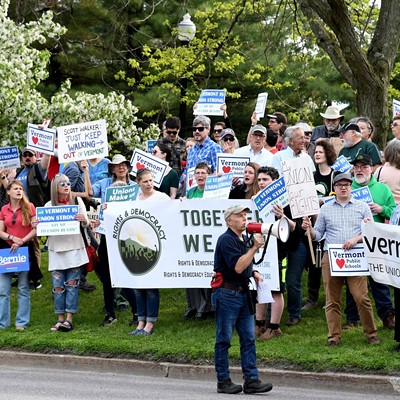 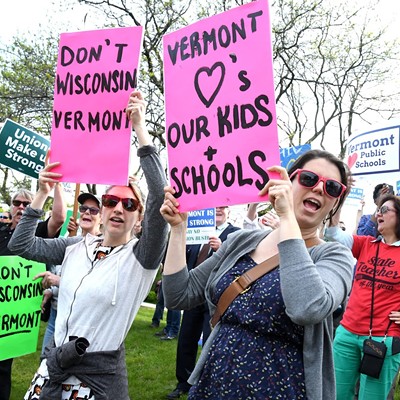 Scenes From the Scott Walker Protest
By Matthew Roy
Click to View 13 slides
The marchers gathered in Battery Park a couple of blocks north of the Hilton and marched down Battery Street to the protest site, led by six members of Brass Balagan, a Burlington-based ensemble, dressed in red jumpsuits. The group’s drummer is a familiar face to Statehouse denizens: Erhard Mahnke, lobbyist for the Vermont Affordable Housing Coalition. “We’re an all-purpose social justice, economic justice, climate justice band,” Mahnke said. “We also do birthdays, weddings and bar mitzvahs.”

Protesters made it clear that Walker was not welcome in their state. “I want Vermont to progress forward, not go backward,” said St. Albans resident Laura Walker, who stressed that she is no relation to the former governor. “Having read about [Walker], I can’t imagine he’d be a positive influence.”

Several elected officials took part in the rally. “This person the Vermont Republican Party is hosting is antithetical to everything I hold dear about being an American and a Vermonter,” said Rep. Mari Cordes (D-Lincoln). “If Phil Scott can stand against [President Donald] Trump’s policies, he can stand up to Scott Walker’s policies.”

Lt. Gov. David Zuckerman, a Progressive and Democrat, greeted protesters. “I’m surprised the Vermont Republican Party would bring this kind of Republican to Vermont, and that Phil Scott would attend,” he said.

When asked if it was fair to associate Scott with the much more conservative Walker, he replied, “Phil Scott has a fine line to walk, but he associates himself with the Republican Party. [The late senator] Jim Jeffords became an independent when he felt the party had left him. Apparently Phil Scott doesn’t feel the same way.”

Walker, whose first term in office was marked by numerous large-scale protests and a recall effort, was unfazed by the crowd outside. “When I see a rally, that’s when I know I’m in the right place,” he said.
Prev
Next