The first F-35s ever to land at Burlington International Airport touched down unexpectedly Wednesday.

Four F-35s from Hill Air Force Base in Utah landed around 7:45 a.m. after being diverted on their way overseas due to weather and refueling schedules, according to Vermont National Guard public affairs deputy Nathan Rivard.

The planes were expected to remain overnight and then depart, although Rivard would not say exactly when.

The visiting fighter jets provided a sneak preview of the 18 F-35s scheduled to arrive starting in August for permanent basing with the guard, which shares a runway with commercial operations at Burlington International Airport.

The Utah-based jets showed up Wednesday with no advance notice. Rivard heard jets while driving to work and thought Hmmmm, he said. He was surprised to learn the four F-35s were parked on the tarmac.

Airport aviation director Gene Richards was also surprised. He was showering for work when two staffers called to tell him they had been notified by employees in the control tower that the military planes would be landing shortly.

The planes were not making an emergency landing, Rivard said. "Burlington was just the easiest place for them to divert to and refuel before they go to their next destination." He declined to say where that might be. 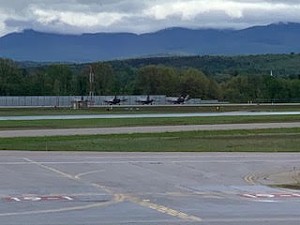 In April, F-35s from Hill Air Force Base were deployed to Iraq as part of Operation Inherent Resolve, the Salt Lake Tribune reported. That's the Pentagon's name for operations against ISIS, the Islamic State of Iraq and Syria.

Coincidentally, Richards and other airport officials held a news conference at 10 a.m. Wednesday about a new study projecting an increase in jet noise when the Vermont Air Guard gets its own fleet of F-35s. They are replacing F-16s, which were phased out this spring. The four Utah F-35s were visible out a window as Richards and other airport officials spoke about a new 2023 noise map.

It projects that approximately 5,000 people and 2,640 dwelling units will fall within a high-noise zone around the airport, and will possibly be eligible for sound proofing and other assistance under Federal Aviation Administration grants.
Prev
Next