During Evangelist's Swing Through Vermont, Picketers Greet His Flock | Off Message

During Evangelist's Swing Through Vermont, Picketers Greet His Flock 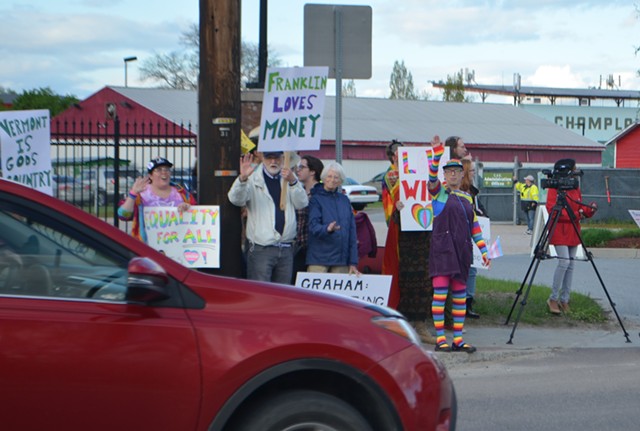 A rainbow-themed welcome wagon greeted the thousands who drove to Champlain Valley Exposition on Tuesday to hear evangelist Franklin Graham's star-spangled message of sin and salvation.

Fifty or so picketers bearing LGBTQ pride flags, bodysuits and hoodies flanked the entrance to the Expo grounds in an eccentric, polite protest of the preacher's anti-gay positions. One man played an accordion.

Rebecca Roose tied a pride flag around her neck like a cape and held a fluorescent sign that offered "Free hugs for sinners."

"I don't believe in the hate he is spewing, and I needed to do something, even though I have protest fatigue," she said. 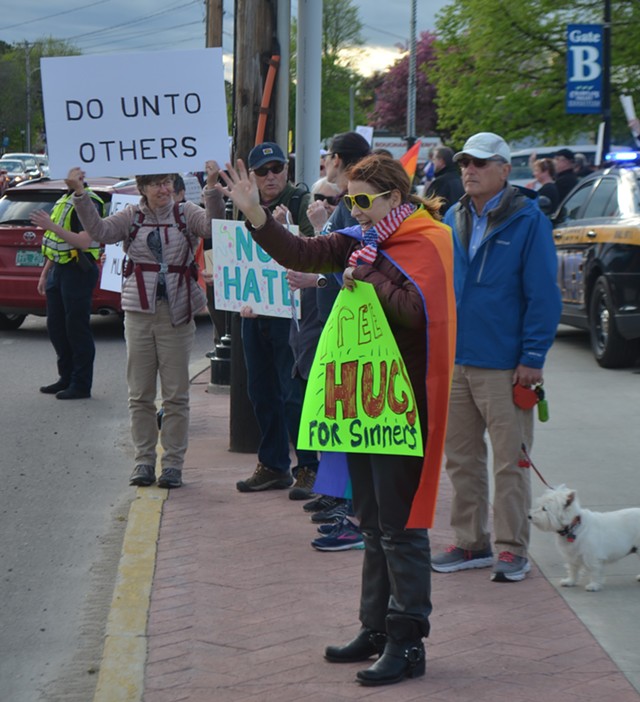 Roose said her message left room for "common ground" with the attendees who drove by. But she conceded she didn't plan on venturing into the free event. "I'm not going to change anybody's mind inside," she said.

Protest Planned at Franklin Graham Event in Essex Junction
By Derek Brouwer
Off Message
Vermont is known for its lack of religious fervor, but evangelicals turned out in force to see Graham and listen to worship rock by the Christian singer-songwriter Crowder.

"I'm stunned," said picketer Alexis Dubief, of Essex Resists. "I didn't think anybody would go to this."

Inside, numerous event "chaplains," identifiable by their green safety vests, were available to tend to attendees' spiritual or physical needs. Free T-shirts went to anyone willing to provide their personal information, and the Crowder merch table was stocked with branded beard oil. (The singer has abundant facial hair.) The crowd munched on fried dough and kettle corn.

Graham's tour fused his form of evangelism with patriotic motifs. A warm-up act led the crowd in a rendition of "God Bless America." When Graham took the stage, he began with a call to prayer for elected leaders, reading the names of Vermont's federal officials and Gov. Phil Scott.
Prev
Next