Champlain Parkway Construction Could Begin by Year's End | Off Message 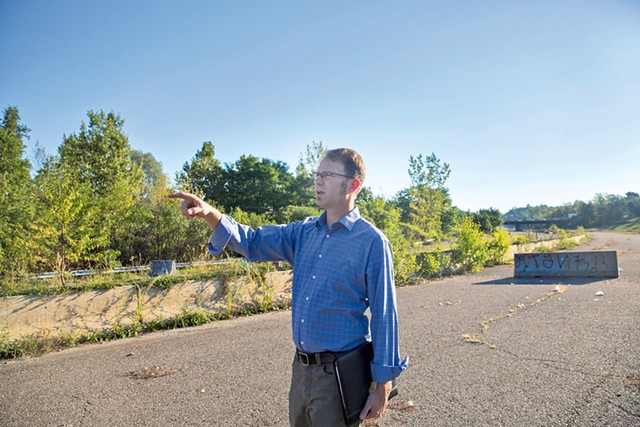 Construction of the long-planned Champlain Parkway in Burlington’s South End could begin this December as long as the city approves a funding plan next month.

The Burlington Department of Public Works is asking the Board of Finance and City Council to approve “Cooperative Agreement Amendment No. 7,” which would cement a spending plan between the city and state for the two-lane, 2.8-mile, multimodal link between Interstate 189 and downtown Burlington.

Public Works Director Chapin Spencer submitted an update for Monday night's council meeting, but members will discuss the plan in detail on June 3, he said. The original cooperative agreement was penned in 1998, Spencer said.

“The fact that this amendment will secure funds for the final design, bidding and construction phases of the project is a key milestone, as it will bring this project through to construction,” he said.

The Champlain Parkway will be 95 percent federally funded; the state will kick in 3 percent, Spencer wrote in his memo. The city’s 2 percent share, plus other “non-participatory” expenses, total $3.2 million. The sum will be paid for across three years, beginning with the city’s fiscal year 2020 budget, which is up for council approval next month.

Some of those expenses include street lighting, landscaping and amenities for pocket parks, the memo notes. The final amount depends on construction bids, which public works will seek after city council approval, Spencer said.

Related Burlington Councilors Take a Ride Along the Champlain Parkway

Burlington Councilors Take a Ride Along the Champlain Parkway
By Katie Jickling
Off Message
Once known as the “Southern Connector,” the Champlain Parkway was first envisioned in the 1960s as a four-lane freeway. Environmental concerns and legal appeals have delayed the project for decades, and only a few barriers remain, Spencer said.

A property owner has appealed to environmental court the project’s operational stormwater permit as well as two wetland permits. Despite the challenges, “we have a viable path forward to start construction,” Spencer said. “We are managing those risks accordingly.”

Champlain Parkway Opponents Threaten to Derail Burlington Project
By Katie Jickling
True 802
Spencer’s memo to the council touts other project milestones. Construction has been held up due to contaminated soils in the project area, but the state approved a remediation plan in March that will “isolate” the soils from human exposure, Spencer reported in his memo.

Earlier this month, the Federal Highway Administration held that a 2010 environmental review was still valid; last spring, a group called the Pine Street Coalition had argued it was outdated.

Over the years, and in response to some concerns, Spencer said the Champlain Parkway proposal has evolved into something “far different than it used to be.”

“This project is a much better project and well suited to enhance the vitality of the South End for years to come,” he said.

Correction, May 20, 2019: A previous version of this story misstated the city's plan to pay for its portion of construction costs.
Prev
Next