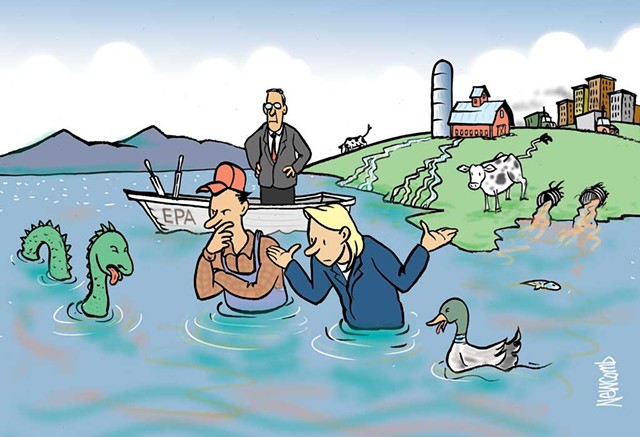 The Vermont Senate Finance Committee is, for the second time this year, trying to figure out how to increase funding for clean water. With less than a week remaining in the legislative session, the committee has not yet approved any new funding mechanisms for water quality improvements and has so far refused to act on a House proposal that would raise the money.

Instead, the committee on Wednesday heard testimony from three men in the tech industry who oppose the House plan, which could raise $6 million next year through a "cloud tax" on software accessed over the internet.

Ted Adler, the president of Union Street Media, said the tax would disadvantage Vermont companies like his as they compete in a global online marketplace.

“In the world where we have a cloud tax and other states do not, [customers] would have a basically 6- to 7-percent penalty for buying … from a Vermont company,” Adler said.

Senators on the committee commented on the difficulty of administering the tax and even determining which transactions would be subject to it, but they didn’t hold a formal vote and no members of the committee explicitly opposed the proposal.

Just as Senate Finance Committee chair Ann Cummings (D-Washington) was adjourning the meeting, Sen. Brian Campion (D-Bennington) floated an alternative plan. He said he’d done some preliminary work with Sen. Chris Pearson (P/D-Chittenden) on a proposal to increase by 1.5 percent the property transfer tax on properties worth more than $500,000, and levy a sales tax on expensive clothing.

Pearson said the proposals hadn't advanced beyond the “brainstorm” stage, but confirmed in an interview that the idea of raising the property transfer tax on expensive properties and taxing “high-end clothes” is an effort to come up with an alternative to the House-approved cloud tax.

Vermont House Backs 'Cloud Tax' to Fund Clean Water Programs
By Taylor Dobbs
Off Message
Cummings, however, wasn’t sold. Sales taxes are automatically directed to Vermont’s education fund, and she said any new sales tax on expensive clothes should, too.

“The clothes is a sales tax,” Cummings said to Campion. “I think we know there will be a time when the ed fund might need that.”

Without further debate, the committee adjourned.

The lack of a firm plan has been apparent since mid-March, when the Senate Natural Resources and Energy Committee approved S.96, which would restructure the way Vermont spends clean water money but didn’t include a way to raise the required funds.

For that, the bill moved to the Senate Finance Committee for the first time. Environmental advocates and state officials, including Natural Resources Secretary Julie Moore, expected those legislators to get down to business and find a funding mechanism.

“We went into the Senate Finance Committee ready to talk,” Moore said in a March 18 interview.

But nothing happened. Instead, the committee voted to move the bill forward “without recommendation” — the legislative version of “no comment.” The Senate Appropriations Committee, charged with spending money and not raising it, didn’t add a funding mechanism either.

Vermont Still Has No Plan to Pay for Clean Water
By Taylor Dobbs
Environment
On April 2, the Senate passed the clean water funding bill without ever adding money for clean water, looking instead to the House Ways and Means Committee to figure out how to raise the cash required by a 2016 Lake Champlain cleanup order from the U.S. Environmental Protection Agency.

Ways and Means delivered with its cloud tax proposal. Despite some objections to the tax, especially from the tech industry, House lawmakers voted last week to approve that funding mechanism.

The bill is now back in the Senate for review of the House’s funding model and, as VTDigger.org reported, the cloud tax proposal hasn’t gotten a warm reception.

“I continue to not support applying this tax, and will try to convince my colleagues to maintain the Senate’s historical position,” Senate President Pro Tempore Tim Ashe (D/P-Chittenden) wrote in an email response to the Vermont Technology Alliance, which is advocating against the tax proposal.

So far, the Senate hasn't proposed any alternative.