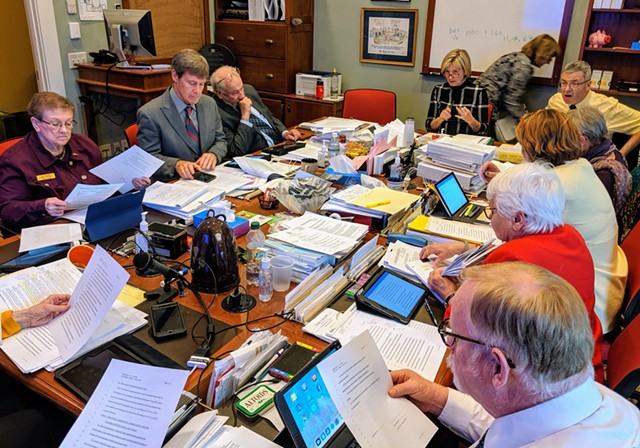 The House Appropriations Committee made a big change Monday to a Senate-approved bill that was designed to bring Vermont's minimum wage to $15 per hour by 2024.

The new version of the legislation would raise the wage by 2.25 times the rate of the consumer price index until it reaches $15; at that point, the annual increases would go up at the same rate as the index.

House Appropriations chair Kitty Toll (D-Danville) told the committee that the alteration means the lowest-earning Vermonters wouldn't begin earning $15 per hour as soon as previous versions of the legislation.

The panel voted 6-5 to approve the change.

The new proposal also has a “pause button,” as lawmakers called it, that would stop the rapid minimum wage increases if the state’s economy goes into a recession. Legislative lawyer Damien Leonard described the feature during Monday's meeting as a "relief valve."

Vermont House Panel Approves $15 Minimum Wage
By Taylor Dobbs
Off Message
“I think asking [low-income Vermonters] to wait longer than five years is wrong, so I am in full support of the language that is in the Senate bill, and I don’t want those 66,000 people to wait seven or eight years,” Rep. John Killacky (D-South Burlington) said during that committee's April 26 meeting.

But the Appropriations Committee opted to make the change, slowing the proposed increase and tying the wage directly to the state’s economy instead of prescribing set annual increases.

Senate President Pro Tempore Tim Ashe (D/P-Chittenden) said that he hadn’t yet reviewed the proposal, and he declined to comment on the change until he learned the specifics.

The full 150-member House has not yet voted on the legislation. If a majority approve this new version of the bill, it would return to the Senate for a review of the changes.