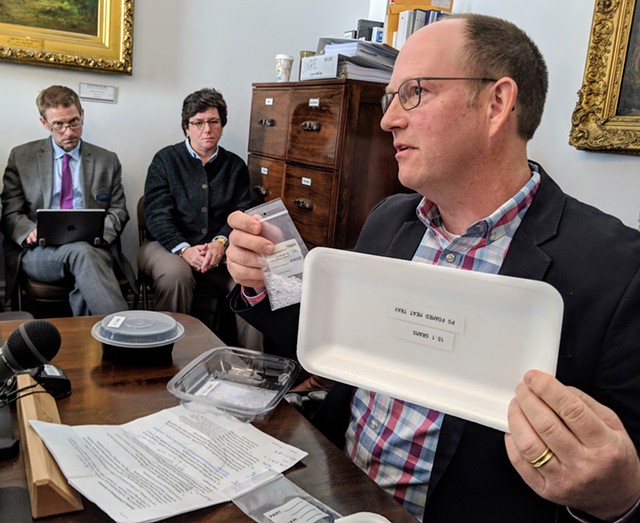 After a lengthy debate Thursday, the Vermont House gave final approval Friday morning to legislation that would ban single-use plastic grocery bags and styrofoam carryout containers. It would also require restaurants and other establishments to provide plastic straws only by customer request.

The bill, S.113, passed on a voice vote, but an earlier procedural vote of 120 to 24 showed that it had broad support in the chamber.

Thursday’s debate was dominated by House Republicans, who alternated between criticizing the legislation and asking highly specific hypothetical questions about its implications for Vermonters and local businesses.

Rep. Bob Helm (R-Fair Haven) accused the bill's supporters of “fear-mongering” about the evils of plastic waste and the impact of Vermont’s trash on the global plastic problem.

“It’s certainly not good, but it’s not that bad,” Helm said of the material, adding that he will “not take the blame for any [plastic bags] that are in the ocean.”

Rep. Patrick Brennan (R-Colchester) then took the floor to pose a lengthy string of questions for Rep. James McCullough (D-Williston), who was presenting the bill on behalf of the House Natural Resources, Fish and Wildlife Committee.

Brennan asked if businesses would still be allowed to give out plastic lids for paper cups. “Most lids are opaque,” Brennan pointed out. “Is that still okay?”

Vermont Senate Backs Ban on Single-Use Plastic Bags, Foam Containers
By Taylor Dobbs
Off Message
Later in the debate, Rep. Bill Canfield (R-Fair Haven) asked again whether such lids would be acceptable. After House Speaker Mitzi Johnson (D-South Hero) reminded Canfield not to ask questions that have already been answered, he turned his questioning to hot drinks — asking whether foam coffee cups would be allowed if customers filled them up within a store, but not right at the point of sale, and then walked to the point of sale to pay for the coffee.

McCullough was ready: Those cups would be banned, he said.

Brennan also quipped that the bill’s intention to rid Vermont of plastic waste might just eliminate the need for Green Up Day cleanups. But if it doesn’t, he wondered if organizers would still be allowed to distribute green garbage bags to Vermonters helping to clean up. McCullough said that as long as the bags weren’t given out at a “point of sale” for groceries or other goods, they would still be allowed.

Once his questions were answered, Brennan said the legislation was “another little jab at small business” and would “put a sign up, in neon this time, that says ‘We’re not open for business here in Vermont.’”

“We should be embarrassed,” he said on the House floor, adding that the bill was vocally supported by youth activists looking to the legislature to protect their future.

Rep. Patrick Seymour (R-Sutton) stood to agree with Lippert. Seymour, 23, said he is one of those young people. Unlike his fellow Republicans, Seymour said he doesn’t see why the legislation is so controversial.

“This is honestly the bare minimum that this legislation could be, and it could be a heck of a lot more stringent,” he said.

The Senate, which passed an earlier version of the bill, is expected to review House changes to it next week. Though Gov. Phil Scott has not made a firm commitment, he suggested at a press conference Thursday that he'd be willing to sign it.

"It sounds like the grocers and retailers are OK with this," Scott said. "They'll find other means of bagging your groceries. If they're OK with it, then I'm OK with it."