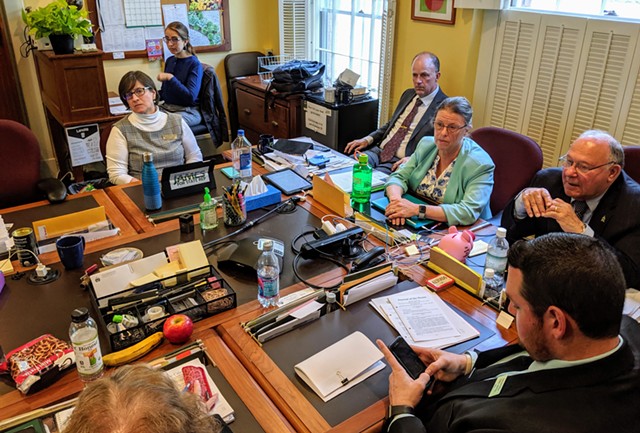 Members of the House and the Senate have reached an apparent impasse in negotiations to grant a one-year deadline extension to school districts ordered by the State Board of Education to merge by July 1.

“This is the definition of bargaining in bad faith,” Senate Education Committee chair Phil Baruth (D/P-Chittenden) said of his colleagues in the House.

Both chambers have passed versions of H.39, a bill designed to forestall some of the forced mergers ordered by the state board last October.

The Senate’s version of the bill offered a deadline extension to any of the districts ordered to combine, as long as those districts elected a new, merged school board and that board voted for the delay. The House-passed version provided that option to fewer districts.

Baruth's frustration stems from the fact that House members are now trying to offer even fewer extensions instead of compromising toward the Senate's position.

House Education Committee chair Kate Webb (D-Shelburne) said her committee’s goal with the legislation was to “reduce chaos in the struggling districts” by offering a one-year extension to those with no chance of meeting the deadline, but forcing some of the districts to comply with the existing deadline.

In order to develop a version that both chambers could accept, House and Senate leaders took the relatively routine step of appointing a conference committee. Such committees, made up of three members from the House and three from the Senate, typically come up with a compromise bill that — after passage by the full House and Senate — makes its way to the governor for approval.

But with H.39, the conference committee failed to come up with a compromise on the question of which districts get a one-year extension to their merger deadlines.

Baruth, who was appointed chair of the conference committee, blames its House members for developing a “rogue position” that doesn’t reflect the House-passed version of the bill. Webb faults senators for failing to acknowledge new information that has informed the House members’ new position.

“There’s a great deal of progress that has been made” toward district mergers, Webb said, “so in the committee of conference, [House members] were attempting to bring that information to light.”

The driving force behind the House’s position is a memo from the Agency of Education that outlines which districts have scheduled a vote on their merged school boards and school budgets. The memo says that “[a]ll but one of the newly formed districts have elected their initial board members or have scheduled a vote of the electorate to do so by May 21.”

Similarly, the memo says all but one of the new districts are on track to hold a school budget vote before the July 1 deadline.

The Windham Northeast Union Elementary School District has done neither.

In light of the fact that many mergers are proceeding apace, Webb said, it made sense to take a one-year delay off the table for those communities. The question, Webb said, is, “Are they going to have the ability to function for students by next school year?”

“That’s information that we are gathering,” she answered, “and it looks really good for a lot of them.”

In response to that information, the House members of the conference committee pitched an idea that would provide a deadline extension for just three of the school district mergers.

He said the proposal to provide even fewer districts with an extension was unacceptable because it made no effort to compromise toward the Senate’s expanded delay proposal. He said the House’s logic would never fly in other types of negotiation.

“[I]f you want to pay $1,000 for a car and the sign says $2,000 and then the dealer says … ‘No, $4,000 because I looked again at my notes,’ you would feel like you couldn’t reliably bargain with that person because bargaining should take place between the understood poles,” Baruth said.

Not only were the three House members getting further from the Senate’s position than when they began, but Baruth said they seemed to be ignoring the will of the House itself, which voted 134-10 in favor of the 10-district merger delay.

Webb said it only makes sense to alter pending legislation in order to reflect new information, even if that means the legislation doesn't end up between the two chambers' starting positions.

"Let’s say the House says we’re going to put $1 million into [legislation for] flood resistance and the Senate says $2 million, and then all of a sudden we have Tropical Storm Irene," Webb said. "Do we need to stay between $1 million and $2 million when actually we [now] need $20 million?”

In response to the breakdown in negotiations, the Senate voted to disband its half of the conference committee and request that the House do the same with the hope that both chambers would send a different group of lawmakers to the bargaining table.

Baruth said the move had another purpose, too.

“It was the only way to try to force the discussion in the House,” he said. The question for that chamber, he said, was, “Look, is this really what you want? You passed something that’s radically different. Your committee is refusing to negotiate for what you want or stated that you wanted through your votes.”

Rep. Heidi Scheuermann (R-Stowe) represents one of the districts that’s been ordered to merge, and has been leading a tripartisan coalition of lawmakers in both chambers trying to get deadline extension legislation across the finish line since mid-January. Last week, she sent a letter to House Speaker Mitzi Johnson (D-South Hero) asking her to follow the Senate’s lead and assign a new trio to the conference committee.

Scheuermann wrote that “with just two weeks left in our legislative session, it is clear that there will be no more work on this conference committee if the House does not discharge its current conferees and appoint new ones — specifically, new members who support House Bill 39 and will work to find consensus on this important bill.”

Without a new House team assigned to negotiate with the Senate, Baruth said, the Senate doesn’t plan to budge. “If I were to let them get away with that, I would be guilty of legislative malpractice,” he said of the House’s bargaining tactics.

Late last month, the Senate tried to work around the impasse by attaching its version of the Act 46 delay bill to unrelated legislation designed to reform special education. That move wasn’t well received in the House, where Webb called it “drama without purpose.”

Both sides seem unwilling to budge, with both Webb and Baruth visibly frustrated by the breakdown. Though members from both chambers believe they have the answer to the Act 46 impasse, no one seems sure what will happen in July if the legislature fails to pass a bill and local communities don’t meet the deadline.

“I’d say that’s the mystery of the session,” Webb said. “I’m not going to make any of those predictions at this point in time. We are still working to try to move something through.”