Community organizers are demanding that the City of Burlington fire three police officers who they say exerted inappropriate force on city residents, particularly people of color.

More than 60 people gathered at the First Unitarian Universalist Society Meeting House on Thursday night to call for accountability and action from Burlington police and city councilors following recent allegations of police brutality.

Jérémie Meli and Mabior Jok have each sued the officers in federal court for using excessive force.

Meanwhile, Vermont State Police are scrutinizing another Burlington officer, Cory Campbell, who punched a man during a March encounter outside the University of Vermont Medical Center. Douglas Kilburn, a 54-year-old white man, was found dead at his home three days after the confrontation. Campbell was also present the night Meli was knocked down and is named as a defendant in that suit.

Related Man Who Died After Fight With Cop Had Broken Jaw, Eye Socket

Man Who Died After Fight With Cop Had Broken Jaw, Eye Socket
By Derek Brouwer
Crime
BLM demanded all three officers be fired for their “pattern of violence without provocation or just cause, particularly targeted toward black men” and that they not be rehired by any other state agency.

The petition, circulated at the meeting and on Change.org, also asks that all Chittenden County police officers use body cameras and release footage to the public. It further asks that the Burlington police stop hiring new cops and instead bring on more social workers since officers’ “inability to de-escalate … does not promote safety in our community." 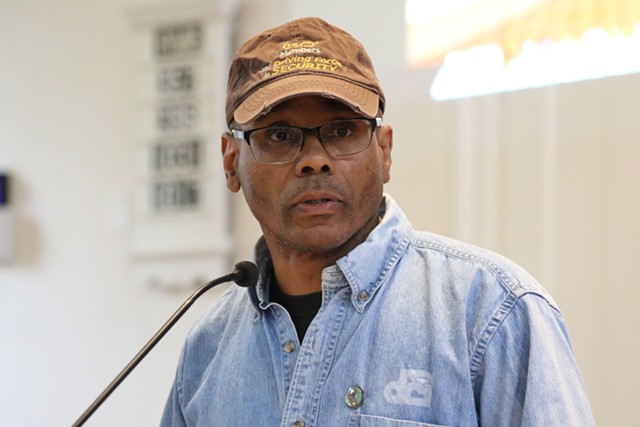 Mark Hughes, Justice for All executive director, spoke of the domino effect these incidents cause: People of color lose trust in police and stop calling them for help, making the whole community less safe, he said.

Violence Caught on Camera Leads to Brutality Claims Against Burlington Cops
By Derek Brouwer
Off Message
“What does it matter that we deploy the largest amount [of body cameras] if the police can withhold, redact and release at their own discretion?” Jafar asked, adding, “The chief bragged about excellent and impactful bias training his officers have received. Where are the results?

“I’m not here to villainize the chief,” Jafar continued. “I’m just here to ask for a leader.”

He also read statements about Jok and another from Beatrice Kambere, Meli’s mother, who said her community “hurts as much as we hurt.”

Congolese Brothers Say a Run-In With Burlington Police Left a Lasting Impression
By Derek Brouwer
Crime
“She does feel this community is here for her,” Jafar said. “She does not feel helpless.”

BLM activist Katrina Battle urged allies to continue the fight beyond Thursday night’s meeting, noting they can’t rely on officials, police or legislators to do it for them. Organizers will rally at Burlington City Hall on Monday before a 7 p.m. council meeting.

After the meeting, Councilor Hanson said BLM’s demands will likely be reflected in a resolution he and his fellow Progs will present at a future meeting, albeit not word for word.

“We need to look at our system of accountability for officers that are behaving in this way,” he said. “We need stronger accountability, and we're not getting that under the current structure."

Hanson said it was “uncomfortable, but in a good way” to hear activists’ direct pleas for change.

“I’m just glad to be a part of this community … and be able to work with people this directly to try to find solutions,” he said. “I appreciate people are paying attention and people are active and trying to do everything they can to make things better.”

Correction May 10, 2019: An earlier version of this story misstated when the Progressive councilors plan to introduce their resolution.
Prev
Next