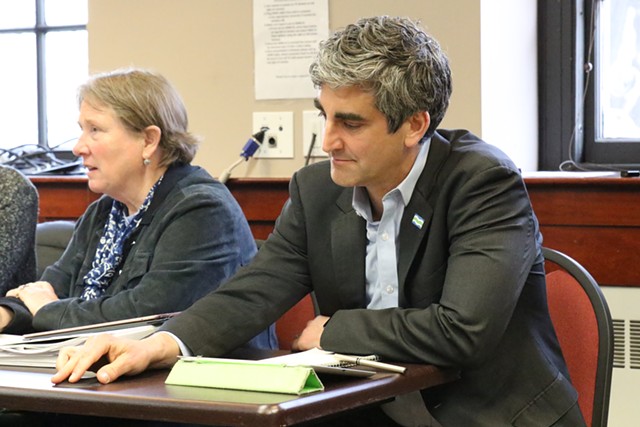 Burlington city attorney Eileen Blackwood made it clear Monday night: The mayor and police chief would not say more than they already have about their attempts to dispute the autopsy report for a man who died after a confrontation with a cop last month.

City councilors had hoped to get answers from Mayor Miro Weinberger and Burlington Police Chief Brandon del Pozo about their intervention efforts but heard more of the same during the discussion hosted in a packed City Hall conference room.

“The chief and I have been questioned again and again by members of the media … about the actions that took place here. We have shared as much as we can about that,” Weinberger said. “The attorney general does not want the facts of the case discussed any further.”

Weinberger said “there’s a difference of opinion” about why he and del Pozo contacted state officials regarding chief medical examiner Steven Shapiro’s ruling that 54-year-old Douglas Kilburn’s manner of death was a homicide. Kilburn was found dead in his home March 14, three days after Burlington officer Cory Campbell punched him repeatedly in the face. The medical examiner concluded that other underlying health factors also likely contributed to Kilburn's death.

Once Vermont State Police finish their investigation, “reasonable people” will understand “the actions that we took,” Weinberger said.

Blackwood instructed councilors to only ask questions about what’s been publicly reported in the media — everything else would need to be discussed in executive session, she said.

But after 45 minutes, none of the 11 councilors present moved to enter a closed session, which would have presumably permitted more candor from the mayor and chief and would have allowed councilors to watch body camera footage of the March 11 confrontation. Councilor Franklin Paulino (D-North District), a deputy Chittenden County state’s attorney, recused himself because of a potential conflict with his job and left the room.

Councilor Ali Dieng (D/P-Ward 7), one of two elected officials who requested to hear from Weinberger and del Pozo, said his aim was simply to learn why they got involved.

“Many people have so many questions and concerns, and we need those questions to be answered,” he said.

Councilor Max Tracy (P-Ward 2) asked Weinberger and del Pozo why they contacted Gov. Phil Scott’s office and Vermont Health Commissioner Mark Levine, respectively, before Shapiro’s report was made public and not after. Tracy wondered if they’d do the same if a similar situation arose again.

Del Pozo said he thought that talking to Levine beforehand was more appropriate than engaging in a public squabble. Weinberger said the city attorney had no issues with him and del Pozo questioning the “unusual” autopsy finding.

Councilor Perri Freeman (P-Central District) wondered why Shapiro’s credibility was questioned at all, but Blackwood stopped that line of questioning.

“We’re getting into the details of what happened,” she said.

Councilor Sharon Bushor (I-Ward 1) asked if Blackwood could clarify the difference between “homicide” and “murder,” but city officials wouldn’t go there.

“I don’t see how to answer that question without getting into the standards the medical examiner used to make the determination,” Weinberger said. Shortly after, Council President Kurt Wright (R-Ward 4) recessed the special meeting and convened the regularly scheduled one upstairs, where two community members urged the council to hold the officials accountable. Charles Winkleman named two other Vermonters killed by Burlington police — Wayne Brunette in 2013 and Phil Grenon in 2016 — and said officials have done nothing.

“Who will be held responsible for this? You are the only ones left to be a check on the mayor and the police chief,” Winkleman said. “What changes will we see from you?”

Brian Waters suggested Kilburn was killed for “being in the way” and urged the council to view the body camera footage.

Later in the meeting, councilors heard a long-awaited briefing on the CityPlace Burlington mall development — though that, too, did not yield much new information.

Will Voegele, senior vice president at managing partner Brookfield Properties Development, could not answer councilors’ primary question: When will the mall project be shovel-ready?

Instead, he said company representatives have regularly been in Burlington since Brookfield’s last city council update in January and are currently waiting on construction bids to return. He confirmed the project’s financing is solid.

Several councilors complained communication has not been frequent enough. Councilor Karen Paul (D-Ward 6) said she wants to see Brookfield at council meetings more often even if there isn’t much to say.

Councilor Chip Mason (D-Ward 5) said the public perception is that the project isn’t happening, and if councilors seem pushy, it’s “to prove to the public this is real.”

Months of delays have plagued the development. Don Sinex, a minority partner in the project, once promised that the controversial 14-story mall redevelopment would be completed by January 2019. Little has happened at the site since last August.

Even though he couldn't provide a date certain for construction, Voegele said getting there is his team’s primary focus. He promised to deliver the councilors a more detailed update in writing in the next few days.

Closing the discussion, Wright homed in on councilors' biggest concern: “You are still 100 percent behind this project?” he asked.