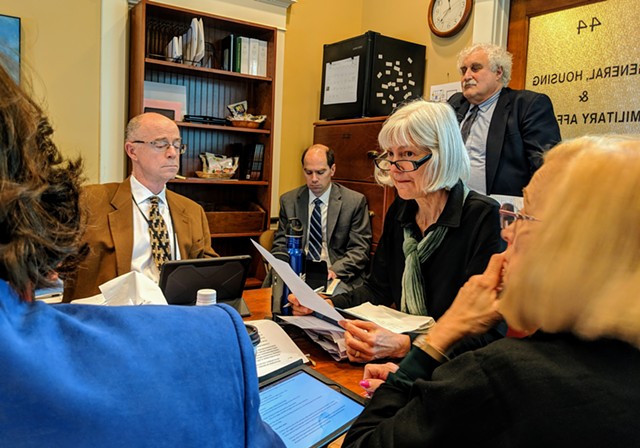 The House General, Housing and Military Affairs Committee approved legislation Friday to increase Vermont’s minimum wage to $15 by 2024. The bill has already passed the Senate.

The House committee didn’t make many changes to the bill, but this week’s deliberations were occasionally tense as lawmakers argued for protections to prevent the bill from hurting the business community.

The measure seemed to hit a speed bump Tuesday after an analysis found a bill amendment would have forced the state to increase Medicaid spending by as much as $27.9 million over the next five years.

Minimum Wage Increase Could Trigger Costly Medicaid Shortfall
By Taylor Dobbs
Off Message
The amendment was designed to prevent “wage compression” at home health agencies, nursing homes, social service agencies and other Medicaid-funded organizations. Wage compression happens when the lowest-paid workers’ wages catch up to those making slightly more, and analysts say it can hurt morale and increase turnover in the workforce.

In an effort to minimize wage compression without creating a multimillion-dollar unfunded liability, the bill contains a compromise. It would provide a wage increase next year for Medicaid-funded workers whose pay is within a dollar of the state’s existing $10.79 minimum wage. That way, a home health worker making $11.60 per hour, for example, would still get a pay raise next year when the minimum wage rises to $11.50.

The wage compression provision only applies to 2020, the first year of increase in Medicaid wages. That cuts the unfunded liability in the proposal from $27.9 million over five years to about $875,000 in 2020, according to legislative economists.

The House committee added language to the bill that would create a study committee to examine Medicaid-funded wages before the legislature reconvenes in 2020.

The committee approved the bill by a 7-3 vote, with Rep. Diana González (P/D-Winooski) absent.

House General, Housing and Military Affairs chair Tom Stevens (D-Waterbury) said Friday that the implications of Vermont’s Medicaid pinch are far-reaching and far more serious than he realized. He said other House committees need to get involved because the issue involves more than just worker earnings. The Appropriations, Health Care and Human Services committees each have a policy stake in the state’s treatment of Medicaid.

“What I’m asking for is … a come-to-Jesus moment” about Medicaid spending in Vermont, Stevens said. “This is hopefully a bigger conversation about how to take care of this population along with the people who do it.”

In the meantime, though, the bill to bring Vermont’s minimum wage up to $15 will keep moving. The House Appropriations committee is expected to take it up next. That committee will have to decide how to fill the roughly $875,000 shortage created by the first year of increases to Medicaid workers.

If the bill passes, lawmakers would face another decision next year about further funding wage increases for Medicaid workers.

Correction, April 26, 2019: A previous version of this story contained a percentage error concerning the minimum wage increase.
Prev
Next