Top state officials were alarmed by Burlington Mayor Miro Weinberger's last-minute request that the governor intervene to delay the release of autopsy findings linking a man's death to an altercation with a city cop.

Weinberger's chief of staff, Jordan Redell, texted, called and emailed the governor's office on the morning of April 10, just as Vermont State Police were preparing to announce that the state medical examiner classified Douglas Kilburn's death as a homicide, the emails state.

"She was energetically reaching out trying to have us intervene to pause the release," Jason Gibbs, chief of staff for Gov. Phil Scott, wrote later that day to the heads of the Department of Public Safety and the Vermont State Police.

"That does not feel right to me, at any level," he wrote in another internal email.

Weinberger confirmed to Seven Days on Wednesday that his staff had reached out to the governor's office after Police Chief Brandon del Pozo raised questions about the medical examiner's work to Health Commissioner Mark Levine.

Weinberger said he asked Redell to contact the governor's office to "apprise" the governor of the city's communications with Levine and to request a discussion about del Pozo's concerns.

"When the city is in some way engaged in a sensitive matter with an agency in state government, we frequently reach out and apprise them," Weinberger explained. "We don't like being surprised, and we don't want to surprise the governor's office."

Kilburn was found dead in his home March 14, two days after being released from University of Vermont Medical Center for injuries sustained during a physical altercation with Officer Cory Campbell outside the emergency department. After Kilburn died, Burlington police asked the Vermont State Police to conduct an "independent investigation" into the earlier altercation, state police said.

The city's effort to intervene was not well received, internal state emails show. The governor's office provided the emails Thursday to Seven Days in response to a public records request.

By noon on April 10, an hour after the Vermont State Police press release had been issued, Gibbs replied to Redell that "it would not be appropriate for us to intervene..." and instructed city officials to pursue the matter through "normal" channels at the Health Department and with law enforcement.

"I would also suggest that the City be very careful not to do anything that could be misconstrued as interfering in, or seeking to influence, the investigation," he wrote. "I'm certain that's not the intent, but the risk of misperception is something your team should consider." 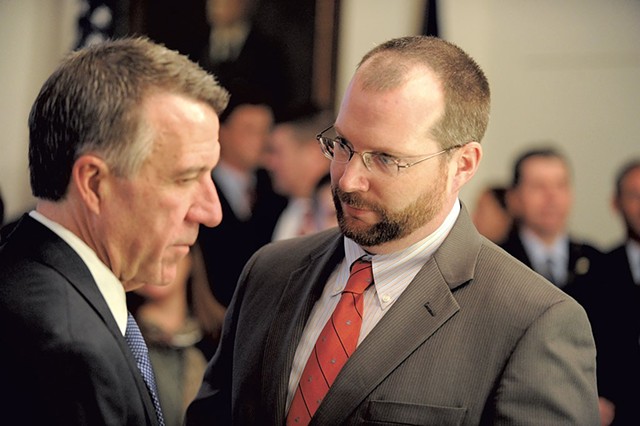 Seven Days reported Wednesday that del Pozo emailed Levine earlier in the morning arguing that chief medical examiner Steven Shapiro, whom Levine supervises, had incorrectly classified Kilburn's manner of death as a homicide. Del Pozo cited conversations with medical examiners in California and New York in describing the professional guidelines he and the mayor believed Shapiro failed to follow.

He concluded by requesting clarification on Shapiro's work "if the ruling on manner of death is not to be amended."

Del Pozo and Weinberger told Seven Days they were looking for answers and accountability, not to influence the outcome of the state's independent investigation.

On Thursday, Weinberger did not dispute Gibbs' assertion that the mayor sought to delay release of the findings. He said he thought the governor would want to hear the city's concerns.

"When all the information is out there, I think any reasonable person will understand why we had questions and concerns about this report," Weinberger added.

In another April 10 email to fellow state officials, Public Safety Commissioner Thomas Anderson wrote, "It's completely inappropriate for Delpozo [sic] to be attempting to influence/change the ME's finding and, in turn, the investigation."

He added, "We have had to repeatedly advise Delpozo [sic] that he has recused his Department from this investigation. For him now to again be inserting himself in this matter is very troubling."

You can read the emails here. Portions were already underlined in pen when they were provided to Seven Days.