Middlebury College officials canceled a forum Wednesday that would have featured conservative Polish politician and academic Ryszard Legutko, saying they were concerned that they could not guarantee people’s safety as protestors organized.

But Legutko still spoke informally to students in a Middlebury classroom at the Robert A. Jones House late Wednesday afternoon.

The Middlebury Campus newspaper live-streamed part of the talk. The coverage ended abruptly after political science professor Matt Dickinson approached the camera and told a student to stop streaming. “That wasn’t allowed,” he said. The class was Dickinson’s American Presidency Seminar, according to the Campus. 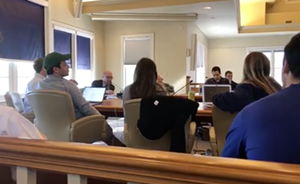 The episode added to the drama of a tumultuous day. Reaction to the cancellation was mixed.

Organizers of a potentially large protest that had been promoted on Facebook at a page called "Ryszard Legutko is a f*ucking homophobe" emphasized that they were not trying to prevent the event from happening.

“In light of the recent announcement by the Middlebury College administration to cancel the Legutko event this afternoon, we are reiterating that it was never our intention to shut this event down, nor prevent the speaker from speaking,” Taite Shomo wrote. Shomo did not respond to a message seeking further comment.

Jason Duquette-Hoffman, assistant director of the Center for Community Engagement at Middlebury College, agreed. “I think [protesters] were very clear that that was not their intent," he said.

Others, including former Republican Vermont governor Jim Douglas, said the administration’s decision to cancel was disappointing. Douglas teaches at the school, and he is on the steering committee of the Alexander Hamilton Forum at Middlebury, which sponsored the talk. He said he was not involved in choosing Legutko to speak, but he had planned to attend the lecture.

Canceling was a mistake, Douglas told Seven Days. "I understand that some folks on campus are unhappy with the [speaker], but that’s exactly the point," Douglas said. "We have to be willing to invite and hear people who have views that we may not agree with. I don’t think an academic institution can be successful in its mission of learning without that.”

Other colleges have bolstered security to accommodate controversial speakers and Middlebury should have been able to do the same, Douglas said. He said he had been “cautiously optimistic” that, after dozens of student protesters shut down an appearance by conservative author Charles Murray in March 2017, the college was moving toward “a time of greater acceptance and tolerance of points of view.”

The college administration talks about free speech but on Wednesday did not “walk the walk,” Douglas said.

Keegan Callanan, a Middlebury assistant professor and director of the Alexander Hamilton Forum, did not respond to messages seeking comment.
Prev
Next