Trey Pecor Made Millions on Burlington Telecom. Now He's Giving Back | Off Message 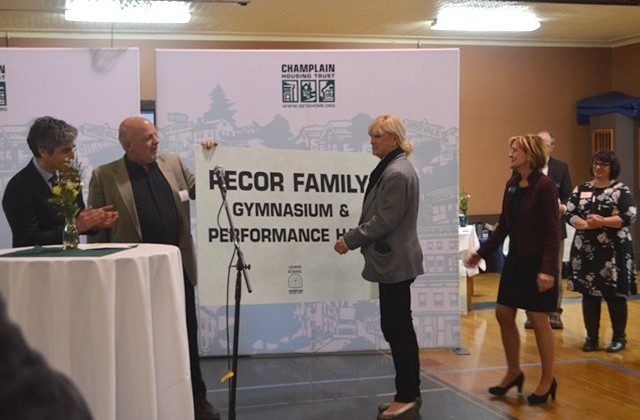 In the weeks since earning more than $5 million on the sale of Burlington Telecom, businessman Trey Pecor has given $1 million to city projects.

Burlington Mayor Miro Weinberger and others acknowledged that they've prodded Pecor to spread the wealth.

"Certainly, his capacity for philanthropy has gone up as a result of Burlington Telecom," Weinberger said. "I, as well as others, have encouraged him to be as generous as he can."

Schurz Communications finalized its purchase of BT for $30.8 million in mid-March, a deal that earned the city about $7 million. Pecor, whose family owns Lake Champlain Transportation Company, reaped about $11.1 million. He'd loaned the city $6 million in 2014, with the understanding that he'd earn 40 percent of the proceeds once the telecom was sold.

Pecor declined to comment, writing in an email to Seven Days that he and his family "love Burlington, but not attention." Yet his wife, Dominique, was the guest of honor last week at the Old North End Community Center when officials unveiled a sign for the newly named Pecor Family Gymnasium & Performance Hall. The couple donated $500,000 to the center, which is nearing the end of a $2.2 million fundraising campaign.

“Thank you for inviting us to be part of this project," Dominique told the crowd, adding that her husband was traveling. "Our family has enjoyed the benefits of this city and region immensely, and for the two of us, it’s really a privilege to be in a position to give back in this way.”

The Pecors' donation was the center's largest, according to former mayor Peter Clavelle, who has led the fundraising campaign. Champlain Housing Trust purchased the old St. Joseph School on Allen Street in 2017 and now leases the space to a variety of nonprofits, including the Burlington Parks, Recreation & Waterfront Department. The money will go toward permanent financing and future renovations.

Clavelle said he reached out to Pecor as a result of the BT sale, adding that the family has always been "generous in a quiet way."

"The Burlington Telecom sale has been a topic of discussion and controversy in the minds of some," he said. "His participation in that project put him in the position to give back to the community."

The Pecors also pledged $500,000 last month to the controversial City Hall Park redevelopment, which went nearly $2 million above the projected budget. The city trimmed some of the costs, and Weinberger said he asked Pecor to help fill the gap. The Burlington City Council approved $5.8 million in park spending on March 25, and construction is set to start later this spring.

There's no written agreement or formal connection between the gifts to the city and the BT transaction, according to former city councilor Jane Knodell. She said she had told Weinberger "on multiple occasions" to encourage Pecor to be generous, even well before the sales process began.

"I could see it coming that they were going to do pretty well," she said of the Pecors.

After former mayor Bob Kiss diverted $17 million in city funds in 2009 to try to save the beleaguered telecom, creditor Citibank sued the city, seeking to repossess the utility's infrastructure. Burlington reached a settlement, but its poor credit meant that banks refused to lend it cash.

Pecor came to the city's aid. In 2014, using an LLC he formed named Blue Water Holdings, Pecor borrowed $6 million from Merchants Bank and then reloaned the cash to the city for the settlement.

Back then, the city didn't expect the telecom to fetch as much as it did, Knodell noted. "My own view is that the return was disproportionate to the risk that was taken on," she said.

The large private payout was part of the reason Councilor Max Tracy (P-Ward 2) would have preferred to sell BT to the co-op Keep Burlington Telecom Local. "That’s why taking the higher bid wasn’t necessarily the best," he said. Schurz paid more to the city, but "a lot of that money was going to go to other people."

Still, Tracy said he was pleased to hear some money is coming back. "It's always welcome," he said of the Pecors' donations.
Prev
Next