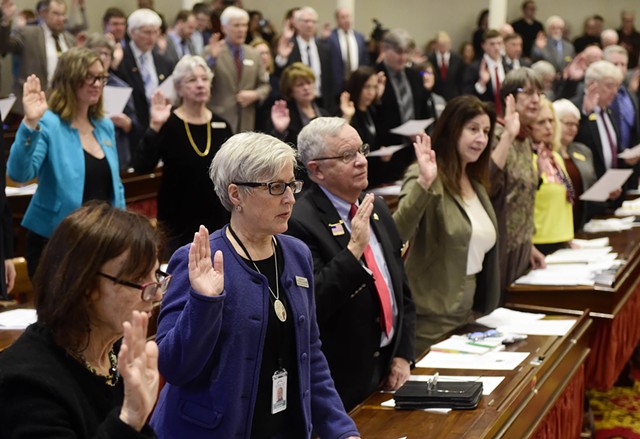 After a long debate Thursday, the Vermont House voted 92-52 to advance legislation that would create a mandatory, statewide paid family leave program. Though the bill won widespread support, it fell short of the two-thirds margin necessary to override a potential veto from Gov. Phil Scott.

During approved leave, workers would receive 90 percent of their normal pay up to $13.34 per hour, the current livable wage established by state economists. The benefit drops to 50 percent for wages above that amount.

To fund the program, businesses would be required to pay 0.1 percent of employees’ earnings beginning in April 2020. Starting in October 2020, that rate would go up to 0.55 percent, or 5.5 cents for every $10 paid to employees. Businesses would have the option to deduct those payments from employees’ checks, share the cost with workers or pay the entire cost.

Rep. Robin Scheu (D-Middlebury), one of three lead sponsors of the bill, said businesses have an incentive to cover the costs of the program for employees in order to attract talent.

“We really see this as not only giving the businesses flexibility,” Scheu said, “but we see it as an economic development, recruiting and retention tool.”

The House defeated a proposal from Rep. Cynthia Browning (D-Arlington) that would have shrunk the benefit to four weeks of paid leave. Browning said the 12-week benefit would be too costly for Vermont businesses.

“If you start with everything you want and it turns out you can only finance it with repeated increases in this rate of contribution, you are going to end up eating up more of the budget than you can afford to do,” Browning cautioned.

Browning’s idea got support from most of the House’s 43 Republicans, many of whom said the proposal amounts to an $80 million payroll tax that Vermonters cannot afford.

“I just can’t support raising taxes on Vermonters by $80 million and spending it on this. I mean, I’ve got way higher spending priorities than this,” Rep. Scott Beck (R-St. Johnsbury) said during a Republican caucus Thursday afternoon.

The maximum benefit possible under the program would be $1,334 per week, paid to people who make $116,538 per year, according to Scheu.

Rep. Tom Stevens (D-Waterbury), one of the bill’s 80 cosponsors, said the legislation would benefit the 85 percent of Vermont workers who don’t have any paid family leave benefit.

“It’s a really simple notion of trying to create a compassionate policy that affects, really, upwards of 300,000 Vermonters,” Stevens said.

The bill would allow employers that offer an equivalent or more generous paid leave benefit to continue using those policies, but there are no other exceptions that allow employers to opt out of the program.

Gov. Scott has proposed an optional program that employers could choose to participate in, but Democratic lawmakers are pushing for a mandatory program in order to provide benefits to almost all Vermont workers.

Scott Proposes a Paid Family Leave Partnership With New Hampshire
By Taylor Dobbs
Off Message
Though the administration and the legislature are still at odds about whether the program should be mandatory, they’ve found agreement on the question of who should administer the program. An earlier legislative proposal called for a state-run benefit, and Scott’s plan calls on the state to contract with a private insurance company to run it.

The legislation approved Thursday is a step closer to Scott’s proposal: It calls on the Department of Financial Regulation to contract with a private insurance company to run the program. If the department couldn’t find a contractor, then the state would set up the paid leave system internally.

Self-employed Vermonters and those who work remotely for out-of-state companies would not be eligible for the paid leave benefit.

The bill, H.107, faces a final vote in the House before it can advance to the Senate.

Correction, April 4, 2019: A previous version of this story misidentified Robin Scheu's hometown. It also contained an error concerning the amount businesses would pay into the program and the salary at which one would receive the maximum benefit.
Prev
Next