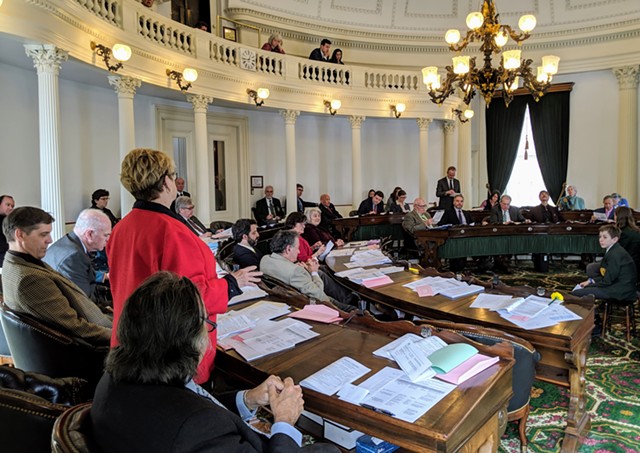 The Vermont Senate gave preliminary approval Friday to legislation that would ban the distribution of single-use plastic bags, foam containers and plastic straws, with some exceptions.

The 27-3 vote followed a short debate that largely focused on a 10-cent fee on single-use paper bags included in the bill. Some senators voiced concern that the fee would be a hardship for low-income Vermonters.

Mostly, though, senators spoke in support of the bill, S.113, which would also establish a study committee to examine the effects of plastic on Vermont’s waste stream and other policies that might help reduce plastic waste.

In order to encourage Vermonters to bring reusable bags to the store, the legislation also proposes to require retailers to charge customers at least 10 cents for each paper bag distributed.

Sen. Michael Sirotkin (D-Chittenden), a cosponsor of the original legislation, said he had concerns about the 10-cent fee, which was added in committee.

“The public may view this as a tax and be quite surprised at … having to pay a dime each,” Sirotkin said. “I know they have a choice for cloth, but I think it’s going to come as sticker shock.”

Bray said similar policies have proven to work in other areas that have already implemented such fees.

“Fundamental to the design” of the bill, Bray said, “is having people move to reusable bags.”

Without giving people an incentive to stay away from paper, Bray said, the bill wouldn’t accomplish that goal as easily.

“In jurisdictions where those bags were provided at no cost, many people just switched to paper, and they changed the nature of the problem, but now they have more paper waste to deal with,” Bray said.

The legislation allows restaurants to distribute straws to customers who request them, and it does not ban the retail sale of straws. There’s also an exception for foam used in packaging, such as grocery store meat trays or egg cartons. Other foam containers, such as take-out trays or insulated, to-go coffee cups, would be banned by the legislation.

Senate Majority Leader Becca Balint (D-Windham) lives in Brattleboro, where single-use plastic bags were banned in July 2018. She said concerns about the rollout of a statewide policy are overblown.

“It was not a big deal at all,” Balint said of the Brattleboro policy.

“We are choking on plastic,” she added. “This is a modest step forward and I think we can get this done.”

Gov. Phil Scott has signaled that he's open to a plastic bag ban.

"I'm not opposed to that," Scott said at a Thursday press conference at the Statehouse. "I don't understand the 10-cent increase in other bags."

Scott said retailers he speaks to are "not as much opposed as they once were" to the idea.

During Friday's Senate debate, Sen. Phil Baruth (D/P-Chittenden) shared a personal anecdote about the plastic problem. He said his 14-year-old daughter became concerned about plastic waste before he did, so she began collecting plastic straws the family was given at restaurants in order to save them from the trash.

After a few months of this, Baruth said, he went to clean out his car.

“There were hundreds of straws that neither she nor I knew how to properly dispose of,” he said as senators laughed.

Sen. Bobby Starr (D-Essex/Orleans) quipped that if Baruth found 100 straws in his car, “he goes out to eat much more often than I do.”

Starr voiced concern about banning products before the study committee had a chance to analyze plastic waste in Vermont, and he was audibly conflicted about his vote. Ultimately, Starr gave a hesitant “yeah” — as if he was still thinking about it when his name was called during a roll-call vote — instead of the quick, customary “yes” or “no.”

The proposal faces a final procedural vote in the Senate next week before it goes to the House for further consideration.