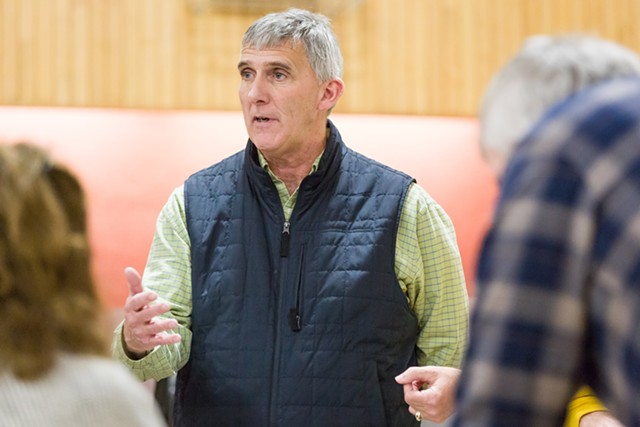 Currently, a councilor or member of a city board must recuse themselves from a vote or discussion if he or she — or a family member — will benefit financially from the matter at hand. Under the current rules outlined in the city charter, officials do not have to provide details about the conflict.

"I think the language is, at best, vague," he said. "We need to be accountable and we need to be transparent."

To that end, Hartnett has introduced a resolution the council is expected to vote on at Monday's meeting. It would ask a committee to make recommendations about whether officials should "be more specific on the reason for recusing him/herself from discussion and voting on an issue." The committee would report back to the full council on July 1. Any change would require an amendment of the city charter.

Hartnett said the issue has long been a concern. But it came to the fore in late 2017, during a vote on the future of Burlington Telecom. After participating in the sales process for months, Councilor Karen Paul (D-Ward 6) recused herself, citing a professional conflict of interest.

Paul never disclosed the conflict — to the public or to the council. Seven Days filed a suit against the city asking for the emails that described the conflict, but lost the case. Paul eventually quit her accounting job to be able to vote on the final telecom buyer.

Paul said she followed proper protocol by seeking the advice of the city attorney and recusing herself as soon as she was aware of the conflict. "The charter says that if you find out you have a conflict, you are to immediately bring that forward. I did that," she said.

Paul nonetheless said she'd vote in favor of a review of the rules Monday. "I think it’s always important to look at our charter and make sure it’s responsive, and if it needs to be updated, it should be updated," she said.

Chip Mason (D-Ward 5) said he would vote "yes" on the resolution — though he noted that he wouldn't support changing the charter. As an attorney, his professional code of conduct mandates that he not share information about his clients, he said. Hartnett's proposed change "would preclude me or any licensed attorney from ever serving on the council," he opined.

Mason said the existing rule works as it was intended. "The purpose of the conflict-of-interest rule is ... to ensure the conflicted individual is not participating in the discussion or negotiation," not to air the conflict publicly, he said.

Either way, Hartnett won't be around to see the impact. Monday marks the last council meeting for the North District councilor, who did not run for reelection. He had previously brought up the resolution last October, he said, but tabled it until the Burlington Telecom sale was complete. That sale to Schurz Communications was finalized last week.

Hartnett emphasized that the resolution wasn't just about Paul. He said he had heard from at least eight members of the public who also wanted the policy changed.
Prev
Next