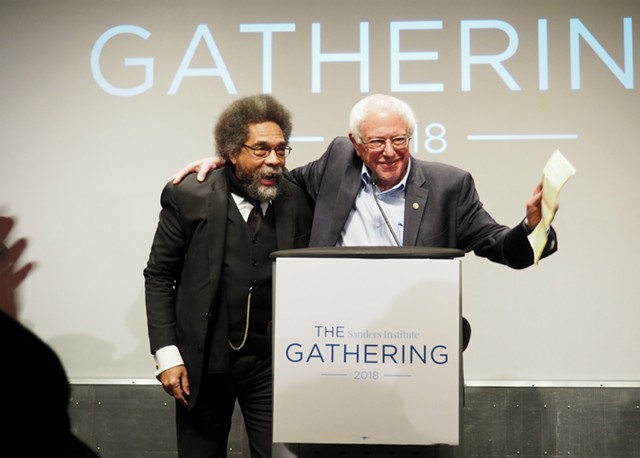 The Burlington-based Sanders Institute is winding down its operations as Sen. Bernie Sanders (I-Vt.) ramps up his presidential campaign.

The Associated Press first reported Thursday that the nonprofit think tank founded by the senator's wife, Jane O'Meara Sanders, and her son, David Driscoll, would stop raising money immediately and close its doors by the end of May. In a press release issued later that evening, the institute said that it was making the move in order to "avoid confusion or even the misperception of any overlap" between the institute and Sanders' presidential campaign.

“We are proud of the work that the Sanders Institute has done to promote progressive solutions to the economic, environmental, racial and social justice challenges that America faces,” Driscoll said in a written statement. “That policy work has always been completely separate from electoral politics. We are taking this step in keeping with that core principle of good governance.”

As a 501c3 nonprofit, the institute is barred from certain lobbying and electoral activities. In an interview with the New York Times, O'Meara Sanders acknowledged that the situation "could become too mushy" if she remained active with the institute while campaigning for her husband.

Founded in June 2017, the institute was one of a pair of organizations that sprouted out of Sanders' 2016 presidential campaign. The other, a 501c4 called Our Revolution, has more legal leeway to engage in political activity. Though some of Our Revolution's leaders have decamped for the 2020 campaign, that organization appears to remain active.

Spokespeople for the Sanders Institute, Our Revolution and Sanders' presidential campaign did not respond to Seven Days' requests for comment and interviews.

Sanders Institute Brings Star Power to Burlington
By Taylor Dobbs
Off Message
The institute has been criticized for paying Driscoll, who had no previous nonprofit or political experience, a salary of $100,000 to serve as executive director. A July 2018 investigation by VTDigger.org found that the organization had accomplished little in its first year. Last November, it hosted a three-day conference on the Burlington waterfront featuring New York City Mayor Bill de Blasio, Rep. Tulsi Gabbard (D-Hawaii), Dr. Cornel West and the actors Danny Glover, Susan Sarandon and John Cusack.

Though the senator himself is not formally affiliated with the institute that bears his name, he was the featured guest at the Sanders Institute Gathering, which served as a launchpad, of sorts, for his 2020 campaign.

According to the institute's press release, its board of directors voted February 28 to suspend operations. It did not say whether the organization would resume its activities at a later date, but O'Meara Sanders suggested it would.

“The work will definitely come back,” she told the Times.
Prev
Next