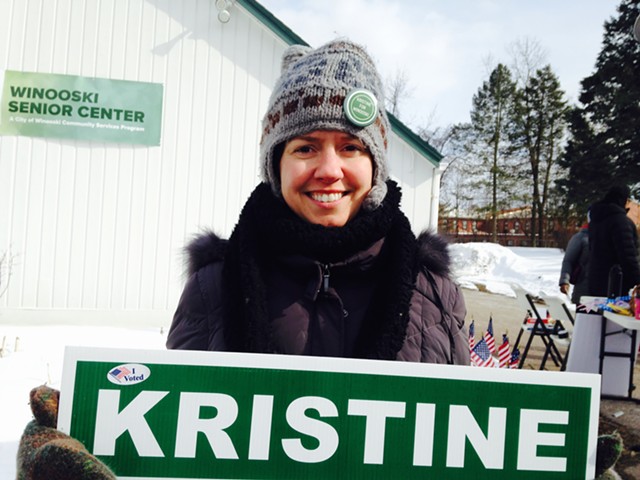 Winooski elected a woman as its mayor for the first time Tuesday when voters chose Kristine Lott over Eric Covey.

The 33-year-old business analyst and her supporters whooped with joy as the results were announced at the Winooski Senior Center minutes after the polls closed at 7 p.m. She got 650 votes to Covey's 478.

Lott was still clad in a thick wool hat, ski pants and heavy boots that she had worn to spend the day greeting voters outside the polls. Lott vowed to make good on her platform to get residents involved in city affairs.

"My primary goal is just to make sure that residents really feel like they are a part of the decisions and engaged in the city," Lott said.

She credited "hand warmers" and lots of door-knocking on chilly winter days for her success. "Listening to residents is what got me here," Lott said.

The Winooski City Council will be full of new faces. Newcomer Mike Myers defeated Corey Mack 667-309 to fill one year remaining of a two-year term. James Duncan and Amy Lafayette were elected unopposed to two-year terms.

A 1 percent local sales tax on rooms, meals and alcohol passed 735-390, and a $3.7 million bond to reconstruct Hickock Street and replace aging water lines under the road was approved 971-170.

The $9.7 million bond authorization for a 300-space municipal parking garage on Abenaki Way also passed, 701-420. It will be the second city-owned garage in Winooski.

Both Lott and Covey were city councilors when former mayor Seth Leonard announced in December that he would step down in January before his term expired. He cited potential conflicts with a new job. Lott and Covey both left their council seats to run to replace him.

Council vice president Nicole Mace was appointed interim mayor — technically becoming the first woman mayor, but not by way of an election. She did not seek election as mayor and also decided not to run again for council.

The race also had a late entry.

"I would like to see more candidates of color be part of the democratic process," Kirkland said, as she greeted voters outside the polls at the Winooski Senior Center Tuesday. 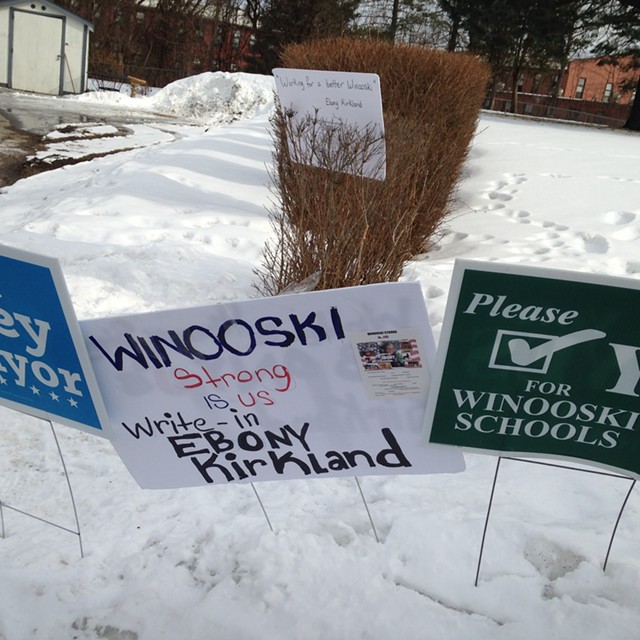