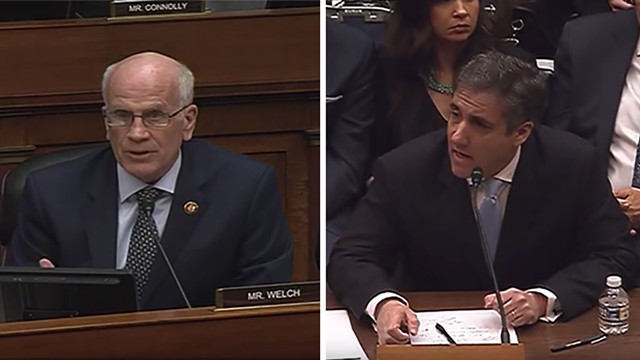 Welch, a member of the U.S. House Oversight Committee, got five minutes to question Cohen during a hearing that riveted the nation. Welch focused on the emails and Trump's foreknowledge of their release. Cohen testified that on July 18 or 19, 2016, he was in Trump's office when Trump's assistant said, "Roger is on line one."

"[Stone] said, 'Mr. Trump, I just want to let you know that I just got off the phone with [WikiLeaks founder] Julian Assange, and in a couple of days there's going to be a massive dump of emails that's going to severely hurt the Clinton campaign,'" Cohen said.

Welch noted that the WikiLeaks dump occurred days later — on July 22, the eve of the Democratic National Convention. He asked Cohen if Trump suggested reporting the leak to the FBI. "No," Cohen replied. Welch asked if Trump indicated that the leak was wrong. "No," Cohen said.

Welch used the remainder of his time to ask about efforts by David Pecker, owner of National Enquirer publisher American Media, to keep Trump-related scandals under wraps. Cohen had earlier testified that Pecker had paid off multiple people who were offering dirt on Trump in "catch-and-kill" arrangements, in which the Enquirer purchased the rights to a story and never published it.

Welch asked for examples. Cohen told of a $15,000 payment by Pecker to an elevator operator who claimed to have information about a love child fathered by Trump. And then he went on to say that Pecker's unpublished material was a concern for Trump.

“When David was looking to become CEO of Time magazine, we were concerned about the treasure trove of documents” he might leave behind, Cohen said.

During a day of sometimes dramatic testimony, Cohen depicted Trump as "a racist, a con man, and a cheat."

Some other allegations were relatively trivial. Cohen said that on orders from Trump, he threatened Trump's high school, college and the College Board with legal action should they reveal Trump's grades or SAT scores. During the 10 years he worked for Trump, Cohen said, he threatened or intimidated people hundreds of times on Trump's behalf.

In an interview after the hearing, Welch explained his focus on WikiLeaks.

"These hacked emails and their release [were] a major factor in the campaign," he said. "It derailed the Clinton campaign at a crucial moment." Welch added that it was "an egregious example of Russian influence on our election."

But Welch wasn't ready to call for impeachment. As he has said repeatedly, he wants to wait for the report from special counsel Robert Mueller. "I believe, more than ever, that we need the Mueller report," he said.

And if Attorney General William Barr refuses to release the full report? "That would be outrageous," said Welch.

When asked if he found Cohen credible, Welch cited his own experience as an attorney.

"Sometimes I had to put a liar on the stand," he said. "That's what we had today. But [Cohen] said he could corroborate his testimony with documentary evidence." Welch also noted that Cohen, who is about to serve a three-year prison sentence for campaign finance violations and for lying to Congress in earlier testimony, would be subject to additional punishment if he again lied to Congress.

Welch is also a member of the House Intelligence Committee, which will hear from Cohen behind closed doors. Welch said that panel "will be able to release transcripts of the hearing, but I don't know when."

Correction, February 28, 2019: An earlier version of this story misspelled the name of the National Enquirer.
Prev
Next