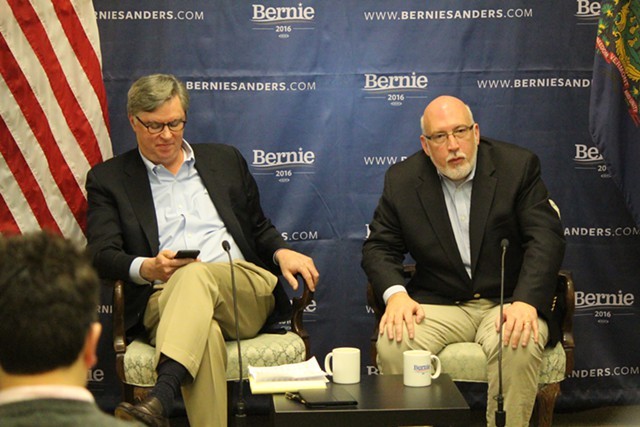 After nearly losing his U.S. House seat in the 1994 election, Bernie Sanders did something he'd never done before: He hired a Washington, D.C., political consultant to help steer his 1996 reelection campaign.

The operative, Tad Devine, has worked in nearly every presidential contest since Jimmy Carter's 1980 reelection bid. He became a key player on Sanders' most important campaigns, returning in 2006 to help the Vermonter win an open seat in the U.S. Senate and a decade later to serve as a senior strategist and ad man for Sanders' 2016 presidential bid.

"He has the capacity to run a serious campaign for president," Devine told Seven Days in December 2013, predicting that Sanders would inspire hundreds of thousands of small-dollar donors to contribute a collective $50 million. By the time the New Hampshire primary rolled around, he'd raised twice that.

On Tuesday — a week after Sanders launched his second White House run — Devine and his two business partners, Mark Longabaugh and Julian Mulvey, announced that they were severing ties with the fledgling campaign. "We are leaving because we believe that Sen. Sanders deserves to have media consultants who share his creative vision for the campaign," they said in a written statement.

Though Sanders had soured on Devine by the end of the 2016 campaign, Longabaugh and Mulvey were working with the senator as recently as last week, when they produced a slick, two-minute ad for his launch. Neither they nor the Sanders campaign elaborated on the rift.

"The campaign appreciates all the good work [their firm] has done and wishes them well," Sanders' newly named campaign manager, Faiz Shakir, said in a written statement.

According to one person involved in the situation, the men were miffed that Sanders had bypassed them to create a second, 11-minute announcement video. Another said that Sanders had written and edited the longer version himself — and had it filmed at a private studio in Burlington just prior to the launch.

Devine, Longabaugh and Mulvey are just the latest leaders of the 2016 campaign to depart Sanders' orbit.

Weaver himself made clear in January that he wouldn't run the 2020 campaign, though he has been heavily involved in its launch.

But the most important strategist of the 2016 campaign remains in charge: Bernie Sanders.

"In terms of strategy, some campaigns just turn everything over to staff and consultants. And that's just not, as you know, the way he operates," Weaver told Seven Days in 2016. "So he was involved in every major decision."

Indeed, Sanders has been known as a micromanager throughout his political career, keeping tabs on details as minor as how many hotdogs would be served at his early campaign events.

"He is his own chief of staff," one Democratic official with ties to Sanders' office told Seven Days in 2015. "He's his own cook and bottle washer."

Perhaps the only other person who wields as much influence in the day-to-day workings of Sanders' political operation is his wife, Jane O'Meara Sanders. She worked for him when he was mayor of Burlington, briefly served as his House chief of staff, produced early reelection ads and became a major presence in the 2016 campaign.

Though plenty of Sanders staffers have griped over the years at the couple's unwillingness to take advice from others, one senior 2016 staffer defended the family affair.

"I think the upside of that is, the message of the campaign looked exactly how Bernie wanted it to look," the person said. "There was no deviation."
Prev
Next