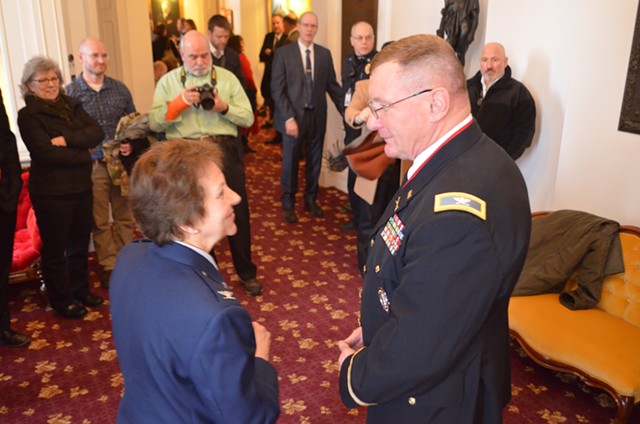 Legislators on Thursday tapped a new leader for the Vermont National Guard who vowed to meet individually with every woman in the organization as he seeks to reform a culture characterized by some as sexist.

Col. Greg Knight of Huntington smiled and hugged his wife and son after Lt. Gov. David Zuckerman announced the results of the election during a joint session of the Vermont House and Senate.

Knight was the only one of four candidates who is an active duty Guard member, currently serving as a human resources officer. All three of his opponents were retired members of the Guard.

On the first ballot, Knight received 95 of the 176 votes cast, enough to avoid a runoff.

Knight benefitted from the strong support he received from two female legislators, Rep. Laura Sibilia (I-Dover) and Sen. Ruth Hardy (D-Addison). Sibilia said Knight is “deeply respected” by Guard members, in part because over his more than 30-year career he has served as both an enlisted soldier and an officer.

“He has walked in the military shoes of all of those he will lead,” Sibilia said.

Hardy said she was impressed by Knight’s passion for ensuring that the men and women in the Guard have higher educational opportunities.

After VTDigger.org published a series last year describing alleged sexual misconduct and substance abuse within the Guard, Hardy said she pressed Knight about how he would bring cultural change and ethical leadership to the organization. Hardy said she came away from her conversations impressed with Knight’s interest in understanding sexism, sexual harassment, sexual assault and “unhealthy masculine culture.”

“Those of you who know me know I do not take the issue of gender inequality lightly,” said Hardy, a former executive director of Emerge Vermont, which works to elect women to public office.

As a candidate for the post, Knight pledged to establish a provost marshal position within the Guard, which he said would be a military law enforcement liaison better capable of conducting a variety of investigations. He also said he would try to learn from other states and the best practices they’ve adopted. Knight said he didn’t know if he’d characterize sexism in the Guard as “rampant.”

“There is enough to be concerned, and we’re going to focus on getting that fixed,” Knight said.

Related Martial Lawmakers: Should the Legislature Elect the Leader of the Vermont National Guard?

Martial Lawmakers: Should the Legislature Elect the Leader of the Vermont National Guard?
By Kevin McCallum
Politics
Vermont is the only state that elects the leader of its National Guard. This year's election was more closely watched than most because it took place soon after publication of VTDigger's series. Some lawmakers have criticized the unstructured nature of the adjutant general's election and questioned whether it should be conducted by secret ballot.

Knight has served in both the Air and Army National Guard, though he currently serves in the latter branch and did so during some of the most intense fighting of the Iraq war. His election represents the first time in more than two decades that the state’s adjutant general has been an Army officer.