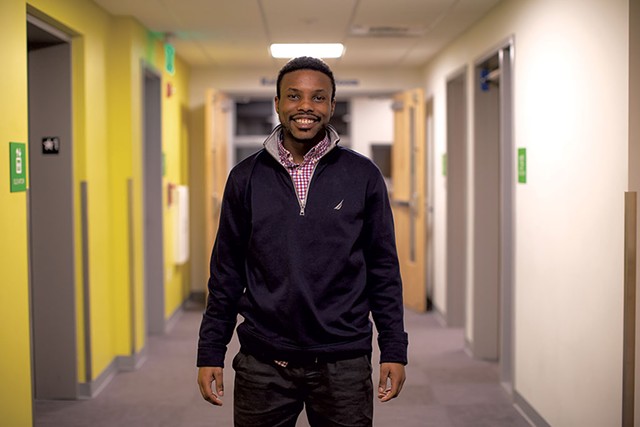 Mohamed Jafar vowed to stay in the race for Burlington's South District city council seat despite a VTDigger.org story published Monday that described a series of sexist tweets the candidate had sent as recently as January 2016.

The messages of 140 characters or fewer included misogynistic statements and allusions to violence. “Somebody hold my earrings, I’m about to beat this bitches ass,” Jafar wrote on Twitter in 2015, when he was a sophomore at Colby-Sawyer College.

“I’ve never hit a women before but I’m bout to make you my first…the closest thing to a women I’ve ever hit is my sister," he tweeted in 2013.

"I don't understand why they make watches for women when there's a perfectly fine clock on the stove," Jafar wrote the same year.

In another post, he wrote, “Stop tweeting about how you get treated. Go find someone who will listen or go lesbian. We don’t mind. It’s better than your bitching #women.”

Though he was contrite on Monday, Jafar, a Progressive running on a platform of equality and civic engagement, said that there's "no chance" he'd withdraw from the race as a result of the revelations.

Burlington's 13 Percent: New Americans Seek Political Representation
By Katie Jickling
Politics
He said he had learned his lesson and, as a result, would push to include mandatory classes on gender equality and "the patriarchy" for high school students. "I invite folks to say, 'Hey, you were wrong.' Dialogue is the only way we’re going to solve these issues," he said.

"I do think I'll lose some supporters," Jafar acknowledged.

In the race for the South End seat, Jafar faces incumbent Joan Shannon, a Democrat, and Paco DeFrancis, an independent.

Shannon said on Tuesday that Jafar's conduct was grounds for him to drop out of the race. She called the tweets "completely abhorrent and disqualifying to serve as a city councilor."

"They were not just sexist; they were promoting violence against women," Shannon said.

More important than her stance on the matter, Shannon noted, is the reaction from Progressive leadership — especially the women within the party. "They have to decide whether they’re going hold their own accountable and what that means," she said.

DeFrancis, who has a history of posting inflammatory messages on social media, said he was troubled by the tweets but would prefer to focus on politics.

"We’re here to discuss policy. I want to discuss zoning, land use regulation, municipal spending rather than tweets," he said.

DeFrancis wouldn't weigh in on whether Jafar should drop out of the race.
"That's totally up to his supporters" — and the candidate himself, DeFrancis said.

Progs contacted by Seven Days on Monday appeared to be standing by their man. Councilor Ali Dieng (D/P-Ward 7) said he was initially disappointed by the tweets but would continue to support the candidate. Dieng has campaigned for and spoken publicly in support of Jafar. Both men are New Americans; Jafar is Somali and was born in a Kenyan refugee camp. He was 7 when his family immigrated to the U.S.

Dieng noted that Jafar was young when he tapped out the offensive tweets. "Where the mistake was made, it was based on someone who came from a place where women are considered lower class — in Africa, especially in Muslim countries," Dieng said. "His life has definitely shown he has changed."

Mellisa Cain, Jafar's campaign manager and a Burlington Progressive Party steering committee member, said she remained committed to the candidate. "I 100% support Mohamed," she wrote in an email to Seven Days.

She said she considered the tweets "bravado" from a male teen and "stupid, tasteless jokes that are clearly based on pop culture references."

"That doesn't excuse them in any way, but looking deeper is helpful to understand the broader context of them," Cain added. "The Mohamed I know is one of the kindest, sweetest and generous men I know."

Political advocacy organization Rights & Democracy endorsed Jafar last month. It's unclear whether the group will withdraw its support, according to communications director Shay Totten. "That's up to the members," he wrote in a message to Seven Days.

Totten said he had reviewed Jafar's social media postings before the organization offered its endorsement, but the search only went back three years.

Correction, February 12, 2019: A previous version of this story identified the wrong year the most recent tweet was posted.
Prev
Next