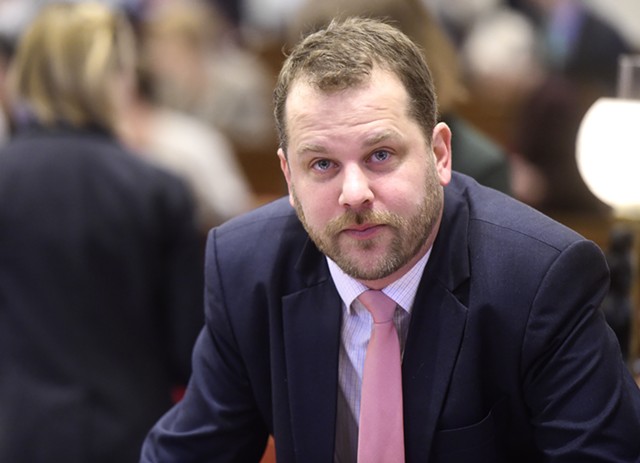 A new bill proposed by Rep. Sam Young (D-Greensboro) would allow adults in Vermont to legally purchase weed on January 1, 2020.

Young’s legislation to establish a regulated retail cannabis market is similar in many ways to a Senate bill, S.54, introduced last month. But the House measure, H.196, would allow existing medical marijuana dispensaries to pay a $75,000 fee so that they could sell to the general public at the beginning of next year. The state would then continue to iron out details about the regulatory structure of the recreational market before other dispensaries could open in April 2021.

In addition to giving Vermont’s would-be cannabis customers an earlier start, Young said the licensing fees would “get some funds in order to create the board and the regulated market.”

Like the Senate bill, Young’s legislation would empower a state-regulated Cannabis Control Board to oversee the market.

The Senate bill was introduced with a 10 percent tax rate. Young’s would impose an 11 percent cannabis tax, plus Vermont's 6 percent sales tax and a 3 percent local option tax to gather revenue for cities and towns hosting pot businesses. The total tax rate under the House proposal would be 20 percent.

Both bills have a policy to foster competition in the market by limiting the number of licenses any one business can hold.

Vermont Attorney General Wants a Regulated Weed Market
By Taylor Dobbs
Off Message
Legislation to tax and regulate cannabis has already passed the Senate numerous times, but there’s never been enough support in the House to send a bill to the governor.

This year is different, according to Young. His legislation has 52 sponsors from all three parties — more than one-third of the House.

Young said some other members have told him they’ll support the bill if it contains certain provisions, which could be added or removed during the committee process. Even without those votes, Young said Friday that his bill already has support from "a little over 80" of the 150 representatives in the House.

Health Commissioner Mark Levine and Public Safety Commissioner Tom Anderson both criticized the Senate legislation for lacking funds dedicated to prevention and education, and for failing to include road safety provisions. Young’s bill has neither, but he said he is open to amendments as the legislation winds its way through the House.

Before Legal Pot Sales, Health Department Wants Millions for Education, Prevention Programs
By Taylor Dobbs
Off Message
The proposal for early retail sales by dispensaries would give a clear advantage to a handful of businesses, which would enjoy more than a year with very limited competition on the market. They would have to fork over $75,000 to the state.

Young said the tradeoff is reasonable because those businesses have “invested in creating the local dispensaries and making it available."

"And actually, since we legalized last year, their sales are down quite significantly because people are getting it through other means," he said. "At this point, it’s a matter of making sure they’re financially viable and that that service is available to medical patients at all.”

Young said the market would still allow other dispensaries to thrive if they innovate by providing different customer experiences and opening in new locations.

During the temporary introductory period before new retail shops open, the bill says medical patients would get priority for cannabis sales at dispensaries, and the public would only be allowed to buy on Thursdays, Fridays and Saturdays until other dispensaries open.

Young's bill is currently before the House General, Housing and Military Affairs Committee, which is chaired by Rep. Tom Stevens (D-Waterbury), a cosponsor of the proposal.