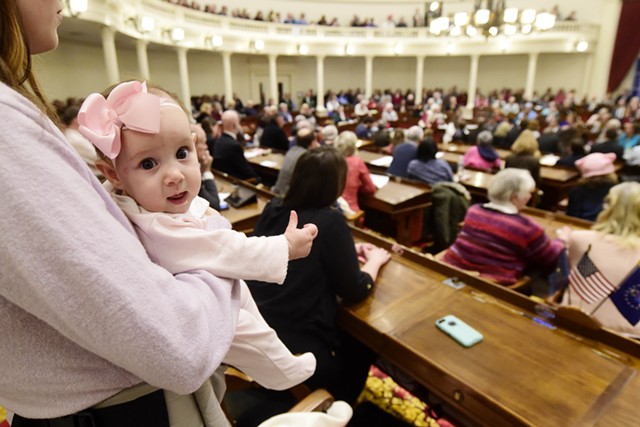 Several hundred people swarmed the Vermont Statehouse Wednesday afternoon for a public hearing on an abortion rights bill. Members of two House committees — Human Services and Judiciary — sat around tables in the well of the House. Those who wanted to testify, or simply be present, filled almost every other seat in the chamber.

Anti-abortion groups and the Vermont Republican Party had urged members to attend the hearing and speak out against H.57, a bill that would establish reproductive rights in state law. “This is a watershed moment,” VTGOP chair Deb Billado said. “We wanted to urge people to be there and express their opinions.”

Opponents say the bill would go beyond current legal protections and create an absolute right to abortion — including late-term abortion. “The bill implies that at eight months and 30 days, you can abort a baby,” Billado said. “I find this to be a horrific thing.”

Supporters say that federal law supersedes state law and would prevent any expansion of abortion rights beyond current practice.

"I don't know what floodgates the bill opens," House Human Services chair Ann Pugh (D-South Burlington) said. "Their concerns about what they think will happen haven't happened in the last 40 years." Pugh was referring to a 1972 Vermont Supreme Court ruling that threw out the state's existing abortion law. Since then, there have been no restrictions on abortion in Vermont. The only limits on abortion have been those in federal law.

Roe-ing Upstream: Vermont’s Lopsided Battle Over Abortion Rights
By John Walters
Fair Game
The testimony illustrated the deep divide around the issue and the profound personal experiences and beliefs that shape the divide. Supporters and opponents alternated, with each speaker having two minutes to testify.

Many abortion opponents spoke from a frankly religious perspective; one speaker recited the “Hail Mary” during her two minutes. Greg Darling of Littleton, N.H., called abortion an “abomination” and predicted the wrath of God would descend on Vermont if the bill passes.

“God will not be mocked,” he said. “God will cover the Statehouse in blood.”

Another told lawmakers to repent or face divine judgment. Multiple opponents cited Jeremiah 1:5, in which God tells the prophet, “Before I formed you in the womb I knew you, and before you were born, I consecrated you.” Equally emotional testimony came from women who had faced early pregnancy themselves. “I became pregnant at the age of 24,” said Brenda Siegel, a 2018 Democratic candidate for governor who spoke on behalf of H.57. “I made the choice to have my baby. The choice is personal and should be protected.”

Dotty Kyle of Warren spoke of getting pregnant as a “dopey teenager” in 1953, “20 years before Roe v. Wade.” She and her parents agreed on abortion, and they found a doctor who performed the procedure illegally after hours. The abortion, she said, “allowed me to graduate high school, go to college, marry and have three lovely children. Without access to abortion, I would have struggled to support a child as a single mother.”

Despite the highly charged nature of the testimony, the hearing was marked by civility. Speakers rarely tried to exceed their time limits. House rules forbade verbal reactions or the display of signs, and audience members kept their peace. The VTGOP’s Wednesday morning email blast appeared to signal a divide between Republican Gov. Phil Scott and his own party. Scott has yet to commit on H.57 but has supported reproductive rights, including the right to abortion.

“I don’t think so,” Billado said when asked if there was a split between the party and its top elected official. “There are pro-abortion people who say this bill goes too far. I can’t speak for the governor, but I suspect he feels that way.”

Scott’s spokesperson, Rebecca Kelley, reiterated the governor’s support for abortion rights — and his support for a vigorous debate. “This is an issue where people are going to weigh-in from all sides,” Kelley said. "The governor believes that all voices should be heard.”

A flood of anti-H.57 emails and calls caused some lawmakers to take a step back. According to House Clerk Bill MaGill, some Republican representatives who had signed on as cosponsors had subsequently asked for their names to be removed.

Though his chamber isn't yet considering the bill, Sen. Corey Parent (R-Franklin) said that he wouldn't support the measure as currently written.

“I consider myself a pro-choice Republican,” he said. “The late-term aspect has fired up a lot of constituents ... I hope the bill will be rewritten to address the concerns that have been expressed.”

The uproar may inspire changes in the bill to make its intent clearer. "Of course there will be amendments," Pugh said. "Bills don't just fly through the legislature."

Pugh's committee is scheduled to vote on H.57 Thursday morning. "We're going to see if we can do it," Pugh said. "Whether we'll be able to vote Thursday or Friday will be up to the committee."
Prev
Next