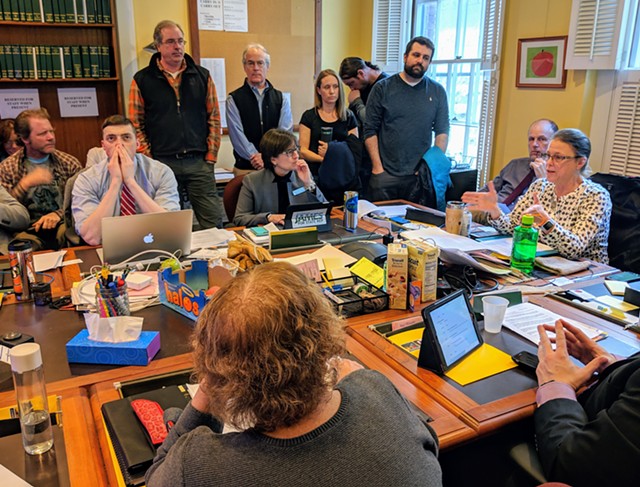 The legislature passed Act 46 in 2015, but House lawmakers are preparing for yet another emotional debate Wednesday about how soon the state should force school districts to merge.

House lawmakers are set to vote Wednesday on a bill from Rep. Heidi Scheuermann (R-Stowe) that would delay forced school district mergers ordered by the state Board of Education. But Scheuermann says an alternative proposal passed late Tuesday afternoon by the House Education Committee has the potential to fracture a tripartisan coalition supporting her bill.

Act 46 sought to save taxpayers money on the cost of education by consolidating school districts. The law provided tax breaks to communities that opted to merge quickly and set a 2019 deadline for consolidations. In November, the state Board of Education ordered dozens of school districts to merge by July 1. Many districts sued the state in response, alleging that the forced mergers are unconstitutional.

Last Stand: Vermont School Districts Vow to Fight Forced Mergers
By Alicia Freese
Education
To give the courts time to decide and districts more time to organize, Scheuermann's proposal would move the deadline for forced mergers to July 1, 2020. That legislation, H.39, doesn’t have the support of the House Education Committee, which voted 7-4 against it last week.

Instead, the committee decided on a proposal of its own. After hours of testimony and debate, the committee voted Tuesday to approve a scaled-back version of Scheuermann’s one-year delay, by the same 7-4 margin. House Education chair Kate Webb (D-Shelburne) said the new proposal, which she developed, would take into account differences in the amount of work various districts have done toward merging. School districts that have prepared a merger proposal and put it before voters would be required to stick with the current Act 46 timeline and complete their mergers by July 1 of this year. Communities that never put school mergers to a vote would get a one-year extension, which would give them until July 1, 2020.
School districts that have mostly consolidated but have retained local elementary schools would still have to fully merge under Webb's proposal, but would be allowed to choose between the 2019 and 2020 deadlines.
Outside of the committee room, Scheuermann’s simpler one-year delay bill has support from plenty of House Democrats, Republicans and Progressives — many representing districts that have been ordered to merge by this July.

Scheuermann planned to introduce the legislation last week as an amendment to a must-pass budget adjustment bill, but backed down after striking a deal with House Speaker Mitzi Johnson (D-South Hero).

Scheuermann said Tuesday that she was promised a debate and a vote on her proposal this week if she agreed not to attach it to last week's budget adjustment bill. The bill was scheduled for a House vote Tuesday, but the Education Committee opted to work with the bill for one more day in an effort to find a version members could support.

Once Webb's proposal emerged, Scheuermann called it “too complicated.” She said she appreciated that it would provide a one-year merger delay for her town of Stowe, but voiced concern that the fragmented approach could divide the coalition of lawmakers who support her proposal.

“I’m not quite sure the end result of this. I have been in politics and public policy for a long time, and by picking and choosing certain districts to be delayed or not be delayed, I think it could create something that doesn’t end up getting the support of the House,” she said. “And right now on our amendment — a straight extension — we’re just about there with support.”

Margaret MacLean, a former member of the Board of Education who has been working with school districts through the Act 46 process, said Webb's plan is too focused on communities' Act 46 "paperwork" and not on what those communities want.

"The thing is, in the communities nobody gives a damn about the paperwork," she said. "Even though their paperwork might be in order, they need time," she added. "And that is not something this committee knows for each community. So they've put everybody in a box based on the paperwork and that box might not be the right box for them."

MacLean said both proposals would improve the current law. She added that under Scheuermann's one-year delay, nothing would stop districts from merging sooner if they're ready.

Webb and others in the House Education Committee said they want to get districts that are ready to merge over the finish line.

“It’s tenuous. You know, there’s a lot of people in those districts that didn’t want to merge,” Rep. Sarita Austin (D-Colchester) said during Tuesday’s committee discussion. “And by giving everybody another year … people would question: ‘Do we not have to merge? Are [lawmakers] going to, like, abolish the law?’ It just seems like these schools, all these schools, have been in upheaval for a long time.”

Rep. Dylan Giambatista (D-Essex) agreed. He said it’s important for as many districts as possible to move beyond the merger debate and focus on education policies and programs more directly relevant to children. He referred to recent legislation calling for improvements to special education in Vermont, early childhood education and more personalized education.

Wednesday, House lawmakers are expected to debate and vote on Scheuermann’s plan. If that fails, lawmakers can then take up the House Education Committee's amendment.

Should Scheuermann’s proposal pass, House lawmakers may opt to drop Webb's from consideration, or attempt to craft a hybrid of the two.

The House is scheduled to convene at 1 p.m. Wednesday.
Prev
Next