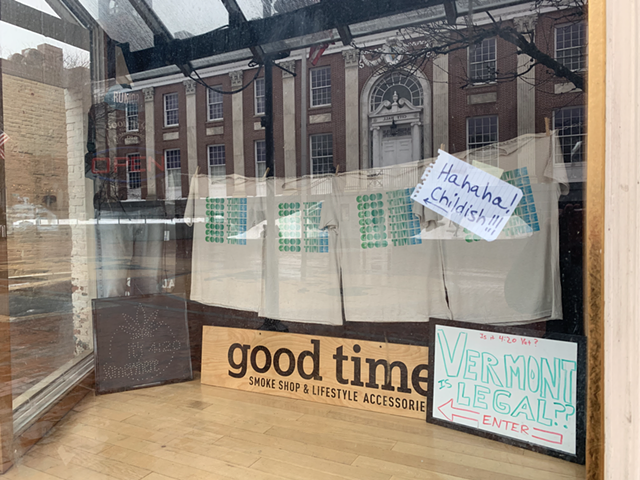 Authorities seized a loaded handgun, five ounces of marijuana and more than $11,000 in cash during a Tuesday raid on a Church Street business, federal prosecutors said Wednesday.

U.S. Attorney Christina Nolan alleged in a two-count criminal complaint that Good Times Gallery owner Derek Spilman possessed a firearm while distributing marijuana. In court papers, authorities said that Spilman had sold pot to minors, including a young woman who allegedly became ill after consuming a bag of edible gummies.

Spilman was released on conditions Wednesday after an initial appearance in U.S. District Court in Burlington. Speaking to the press after the hearing, Nolan said the presence of firearms in the store was “a very significant factor” in the feds’ decision to take action, as was the store’s location on a prominent pedestrian thoroughfare.

Nolan noted that marijuana remains a controlled substance under federal law. And though she acknowledged that Vermont legalized the personal possession and cultivation of pot last summer, she said, “This conduct is not even close to legal under state law.”

Spilman did not speak to reporters as he exited the courthouse. David McColgin, a federal public defender who represented Spilman in court, declined to comment on Wednesday evening.

As Seven Days reported Tuesday, authorities knew about Spilman’s alleged conduct for months before taking action. According to court papers, the Burlington Police Department received at least three tips in September and October that Good Times was dealing pot to minors. When an officer approached Spilman in October, he said he only sold legal CBD products — and only to those over 21.

Acting on a tip, a state Division of Liquor Control officer entered the shop under cover in December and witnessed Spilman selling what appeared to be marijuana, the court papers said. The officer seized more than two pounds of “green leafy bud material” and observed a loaded Hi-Point .380-caliber handgun behind the counter.

Even after that bust, Spilman allegedly continued dealing. Last Friday, an undercover Burlington officer posed as a customer and bought marijuana buds and edibles from Spilman, court papers say.

Nolan said she learned of the investigation Monday and decided to act quickly because, in her view, Spilman posed a risk to the public.

During Tuesday’s bust, officers found a second gun, a Ruger 9mm, which was also loaded. In addition to the marijuana, they seized a bottle of suspected amphetamines.

Nolan said the maximum penalties Spilman faces are five years in prison for the drug charge and 10 years for the gun charge.

Nolan’s office initially sought to detain Spilman until trial, citing “concerns regarding the defendant’s mental health.” Prosecutors subsequently withdrew the motion. Spilman is due in court again on February 20.
Prev
Next