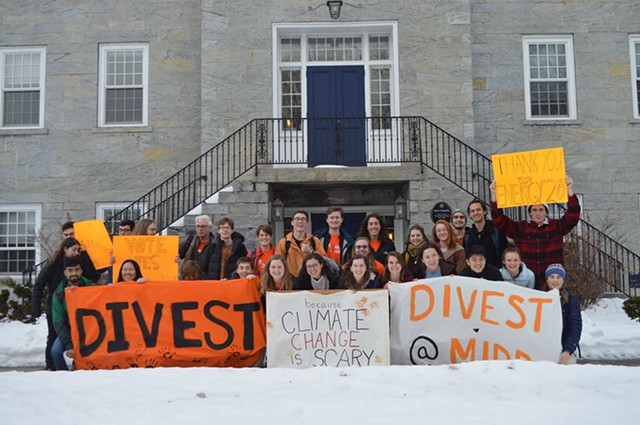 Years of student pressure is prompting Middlebury College to phase out most investments in fossil-fuel companies, the school announced Tuesday.

The board of trustees for the private liberal arts college unanimously voted to divest January 26 as part of a sweeping sustainability plan dubbed Energy2028, according to a Tuesday press release.

Trustees had previously rejected students' divestment demands. The college's resistance was notable because scholar-in-residence Bill McKibben is a leading proponent of the international movement, as is the organization he and a group of Midd students founded in 2008, 350.org.

"Today, Midd proved itself to be an institution that recognizes the necessity of divesting from an industry actively feeding climate change and instead working to build a better, more just future," student and Divest Middlebury organizer Cora Kircher said in a statement.

Fossil fuel investments make up about 4 percent of the college's $1.06 billion endowment, and will be phased out over the next 15 years. The gradual wind down is intended to minimize effect on endowment performance, the college said.

Middlebury said it will not divest from fossil fuel holdings contained in general index and equity funds, which account for another 1 percent of the endowment.

Beyond divestment, the college's Energy2028 plan includes commitments to reduce on-campus energy use by 25 percent and source its energy entirely from renewable sources.

Middlebury is already halfway to the latter goal.

“This plan is true to Middlebury’s culture and values," president Laurie L. Patton said in a statement. "It is bold and aspirational while remaining realistic and highly practical."

McKibben tweeted Tuesday that the trustees' decision puts Middlebury "back among the very greenest institutions in the world."

Three other Vermont colleges — Goddard College, Sterling College, and the soon-to-be-defunct Green Mountain College — are listed among the 1000-plus organizations worldwide that have committed to divestment, according to gofossilfree.org.
Prev
Next