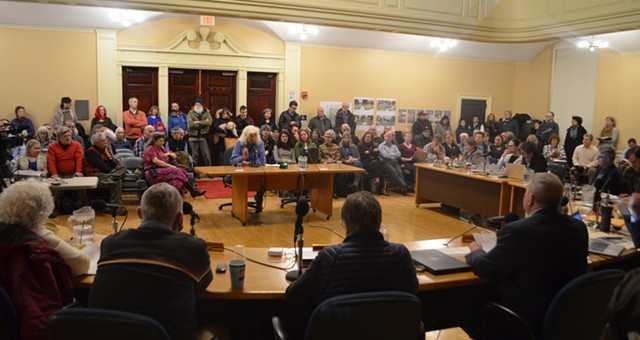 Queen City voters will not get a chance to weigh in on the future of City Hall Park.

The Burlington City Council declined on Monday night to put a question on the Town Meeting Day ballot that would have asked whether voters wanted to cancel the $4 million project to renovate the downtown green space.

The 6-6 vote was a defeat for the citizen group Keep the Park Green, which has fought the park plans for nearly three years. Under council rules, a tie vote means the measure fails.

The vote means the future of the park is decided. Construction on the current plan, which includes a splash park, wider pathways and more seating, is slated to begin in the spring.

Mayor Miro Weinberger, who supported the current park renovation plan, argued that too much time and money had been invested to go back to the drawing board. The proposal, he said, was a result of "a multiyear effort by a multidisciplinary, multiagency team." The mayor urged the council to "make a decision on this park once and for all."

Some councilors argued that the question wording was one-sided and reflected the views of Keep the Park Green."We are not obligated to put any question on the ballot," City Council President Kurt Wright (R-Ward 4) said. He had previously pleaded with the group to amend the language, to no avail.

The decision followed nearly two hours of public forum. Residents filled Contois Auditorium in a standing-room-only meeting, and more than 50 people spoke forcefully on both sides of the issue.

Multiple speakers emphasized that the number of residents who signed a petition circulated by Keep the Park Green proved the widespread discontent over the existing plan. The group collected more than 3,300 signatures, significantly more than the 5 percent of registered voters required to get the question to the council.

Not allowing voters to weigh in, Andrew Simon told the city representatives, would be “a shame, an affront to democracy and a mistake."

Wayne Senville compared the signatures to the blinking red lights that flash as a train approaches. The petition, like the lights, "is asking you to stop and to listen," he said.

Those in favor of the current plan argued that the people of Burlington have already had plenty of opportunity to make their voices heard. That was the argument made by Milton Rosa-Ortiz, who contended that those opposed to the plan were losing sight of the benefits of the existing proposal. "I worry long-term wisdom is being trumped by short-term passions," he said.

The ballot question was nonbinding. Even if it had gone on the ballot and passed, the council would not have been forced to act on it.

“Shall we, the citizens of Burlington, advise the Mayor and City Council to:
A. cancel the current plan for City Hall Park that was approved by the City Council on 6-25-18; and
B. instead, repair, maintain, and improve the Park by preserving more existing trees and shaded areas, repairing grass and existing walkways, increasing lighting and benches, and retaining the historic character of the Park?”


The council on Monday also voted to allow residents to decide two charter changes. Burlingtonians will vote on whether to create a new city department, the Department of Permitting and Inspections. That charter change also gives the mayor the power to appoint the director of the Planning and Zoning Department.

The council also reaffirmed its decision to put the Downtown Improvement District on the ballot. Currently, a group of businesses that make up the Church Street Marketplace pay a fee to receive additional services such as local promotion, snow removal and public events. The new plan would expand that district to include all of downtown.