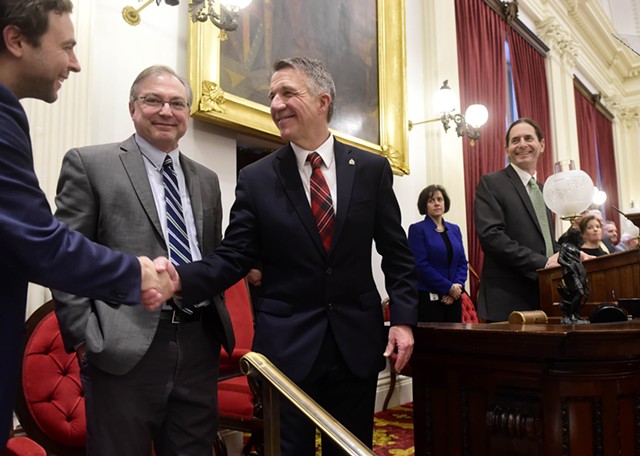 The budget proposal Gov. Phil Scott unveiled Thursday is a rather cautious document, in line with the Republican's record of fiscal conservatism. The governor made very modest proposals for new or expanded programs and called for much of the state's revenue surplus to help pay down debt.

Some things have changed. Scott actually pitched new or increased taxes and fees — a departure from his first term. And in an address Thursday afternoon to the House and Senate, he didn't unveil any big surprises of the kind that have led to past battles with the Democratic legislature. The budget "did not immediately set up a showdown," said Senate President Pro Tempore Tim Ashe (D/P-Chittenden) shortly after Scott's speech. "Even where there are differences, there is space for discussion."

Which does not guarantee an absence of showdowns. Lawmakers have yet to actually read Scott's proposed budget. Their initial reactions were entirely based on listening to the governor's address. A likely flashpoint will come later in the session, after voters approve school budgets and the Agency of Education sets property tax rates. In 2018, Scott sought to keep residential and nonresidential rates level, sparking a standoff that extended the legislative session by almost two months. 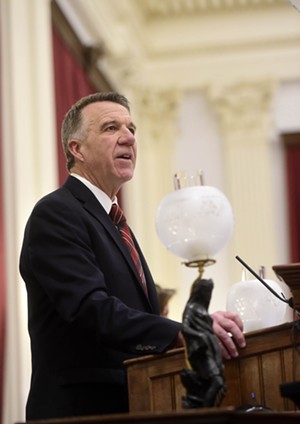 Beyond the speech itself, there are signs that the Scott administration has adopted a new, more open approach to governance. Top officials seem to be spending more time in the Statehouse, and they've been initiating contact with legislative leaders in an effort to find common ground.

It's still early, but these are promising signs.

Many of Scott's proposals are likely to meet with resistance from the legislature. His plan for clean water funding relies on the estate tax, which top lawmakers see as unreliable because it fluctuates wildly from year to year. He'd like to more than double the minimum value of estates subject to the tax, from the current $2.75 million to $5.75 million — a plan that would be phased in over four years. To many Dems and Progressives, that may look like a giveaway to Vermont's wealthiest residents.

Related In Break From Past Pledges, Scott Pitches New Taxes and Fees

In Break From Past Pledges, Scott Pitches New Taxes and Fees
By Kevin McCallum
Off Message
Scott would like to spend $2.5 million more luring workers to Vermont; a similar proposal last year got a giant haircut in the legislature. His budget includes rather minimal steps to address climate change; the Democratic caucuses are likely to want more. Scott proposed cutting capital spending as a way to reduce long-term debt; that idea may get a chilly reception in the relevant House and Senate committees.

Also, top lawmakers expressed disappointment that Scott did not address the mental health care system or deficiencies in human services. But despite all that, Scott's budget received a warm initial reception. Or, shall we say, a much less chilly reception than his previous budgets.

This session could be far different from the last two. It is, of course, too soon to tell for sure.
Prev
Next