In Break From Past Pledges, Scott Pitches New Taxes and Fees | Off Message

In Break From Past Pledges, Scott Pitches New Taxes and Fees

Gov. Phil Scott on Thursday outlined a state budget proposal he said would boost Vermont's economy and grow its stagnant workforce. “It’s the root of every problem we face,” he told a joint assembly of the House and Senate, referring to the state’s demographic challenges.

In a striking departure for the tax-averse governor, Scott said he would fund his budget, in part, with an array of new taxes and fees his administration had previously eschewed. If approved as proposed, Scott’s $6.1 billion budget for the next fiscal year would represent a 4 percent increase over this year’s.

While part of the budget boost would be made possible by an uptick in revenues from existing sources, Scott’s plan also relies on approximately $18 million worth of additional taxes and fees. Those include a new tax on e-cigarettes, enhanced collection of online hotel room taxes, and increased fees on stockbrokers, clean-energy developers and others.

The proposal represents a break from Scott’s 2016 campaign pledge to avoid new taxes. In recent months, he and members of his administration had telegraphed that they were open to the prospect. Even as he changed his tune, Scott reiterated his belief that “we need more taxpayers, not more taxes.”

“The budget I present today is balanced and spends within our means, while investing in both our obligations and areas that will give us the highest return,” he said. 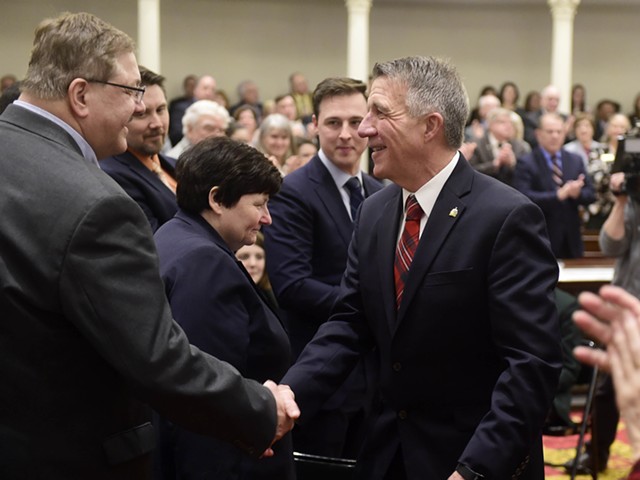 Scott’s speech lacked major surprises. He had teased many of his priorities two weeks ago in his inaugural address. Others have been publicized since then, such as a plan to use the estate tax to fund required clean water initiatives.

In a moment of levity, the governor won a big laugh from the packed House chamber when he thanked Speaker Mitzi Johnson (D-South Hero) for not cancelling his speech, a reference to U.S. House Speaker Nancy Pelosi’s (D-Calif.) decision to postpone President Donald Trump’s State of the Union address until the federal government is reopened.

In addition to laughs, Scott won praise from Democratic leaders for striking what they referred to as a collaborative tone — perhaps a necessity now that Democrats and Progressives enjoy veto-proof majorities in both chambers.

Following Scott’s remarks, Johnson said she was pleased to hear many of the governor’s ideas presented not as an ultimatum but as the start of a conversation.

“That’s very different from what we’ve seen in the past, which was, ‘This is a bill that I want on my desk by this date,’” the speaker said.

Senate President Pro Tempore Tim Ashe (D/P-Chittenden) was similarly encouraged by Scott’s plan, calling it “the kind of budget we were hoping to see.”

“It did not immediately set up a showdown,” Ashe said. “That's a welcome difference between this budget and the last two. There's an opportunity to work together."

He stressed, however, that he and other legislative leaders had not had time to delve into the details.

Rep. Kitty Toll (D-Danville), who chairs the House Appropriations Committee, said the likelihood of slower growth ahead gave her pause that the governor might be setting up the state for trouble in 2021.

Asked what she might do differently, Toll said, “Maybe not spending all the revenue that we have available.”

Walters: Scott's Budget May Signal a More Cooperative Approach
By John Walters
Off Message
Scott said he would direct much of his additional proposed spending toward the state’s pension obligations. Doing so, he said, would help “restore our fiscal fundamentals.” Scott wants to use $22 million of surplus revenue to pay off a loan to fund the health benefits of retired teachers.

He also wants to direct $2.4 million into a fund to begin paying these health obligations directly, as well as $3 million toward paying down the unfunded liability in the teachers’ pension system, which has been underfunded for decades.

One new tax proposal doubled as a health initiative.

Scott recommended extending an existing tax on tobacco to cover e-cigarettes, which he said would raise $1 million. He said that 1.5 million new children across the country tried e-cigarettes in the past year, and the use of such devices has doubled among youth in Vermont.

The governor called the trend frustrating, given all the work the state has done to reduce tobacco use and reduce nicotine addiction.

“Let’s not make the same mistakes with e-cigarettes or anything else,” Scott said. “Our kids must know the dangers of these behaviors, and we should stop it in its tracks.”

A similar tax expansion, which would target e-commerce sites such as Amazon.com, would generate $7 million in additional sales taxes. Scott proposed directing those funds toward early childhood care for low-income residents.

The governor made good on his promise to identify a sustainable revenue source to pay for the state’s federally mandated clean-water obligations: the estate tax. At the same time, he called for a gradual increase in the estate tax exemption, from $2.75 million to $5.75 million.

Giving wealthier families a break, Samsom argued, would prevent them from leaving Vermont — and taking their money with them. Scott framed the plan as a way to use existing revenues to accomplish two important goals.

“If we can come together, this change will help keep more of these taxpayers here and support a legacy of clean, healthy lakes, rivers and streams, all at the same time,” he said.

Some legislators have expressed skepticism that the estate tax is the right revenue stream to pay for clean-water work.

On the schools front, the governor proposed an additional $3.2 million for the Vermont State Colleges. He said that would stop a planned 3 percent tuition increase for the upcoming school year. Scott also called for $1.5 million to fund safety improvements at schools and $1.3 million for lead testing in schools.

The governor set aside an addition $1 million to invest in broadband connectivity and proposed helping rural communities use bond proceeds to fund municipal broadband services.

It wasn’t all higher taxes and fees. Scott also proposed eliminating the land gain tax, which brings in $1.75 million per year. The tax was implemented in the 1970s to slow rapid development by taxing some properties resold within six years, but it has become a barrier to reinvestment in neighborhoods, he said.

In addition, he proposed eliminating the tax on military retirement income, which he said only seven states impose. That would cost $1.4 million, but Scott called it “the least we can do” for veterans. 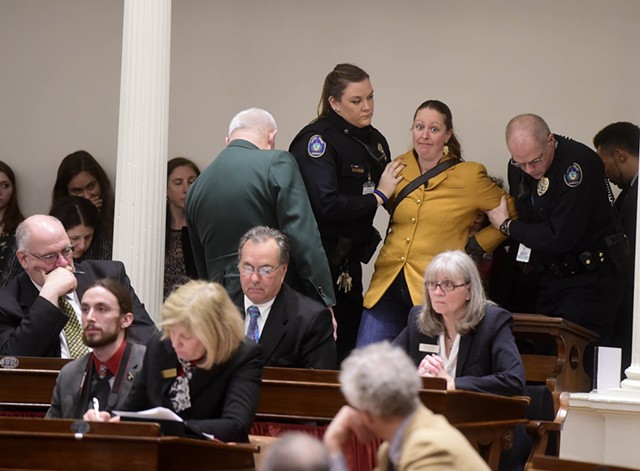 The speech was nearly free of disruptions by protestors like those that have occurred in recent years. Toward the end, though, as the governor called on the legislature to act with civility, there was a small disturbance at the back of the room. A woman who was being led out of the chamber said she was being arrested for booing.

As she exited the chamber, the governor returned to his remarks, saying, “Let me go back to the civility part,” to loud applause from the chamber.