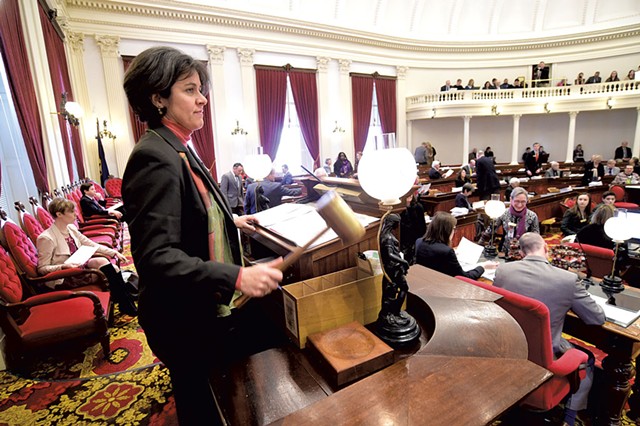 A day after Republican Gov. Phil Scott pitched a plan for a voluntary paid family leave program, the Democratic leaders of the Vermont legislature threw their support behind an alternative proposal that would provide the benefit to all Vermonters and fund it with a payroll tax.

At a Statehouse press conference Thursday, House Speaker Mitzi Johnson (D-South Hero) and Senate President Pro Tempore Tim Ashe (D/P-Chittenden) characterized their plan as a better way to protect those helping a sick or injured relative, becoming new parents or recovering from an illness themselves.

The Democratic proposal, which is expected to be introduced soon in the Vermont House, would provide 12 weeks of leave with full pay, according to Ashley Moore, the state director of the Main Street Alliance and co-chair of the Vermont Family and Medical Leave Insurance Coalition. It would be funded by a 0.93-percent payroll tax, split evenly between employers and employees.

Scott, who vetoed mandatory paid leave legislation last year, unveiled his own proposal Wednesday at a press conference in New Hampshire. His would cover all state workers but would be voluntary for private businesses and administrated by a private insurance company — not the state. Scott's plan would provide participants with six weeks of leave at 60 percent of their full wage.

Scott Proposes a Paid Family Leave Partnership With New Hampshire
By Taylor Dobbs
Off Message
The Vermont governor was joined at Wednesday's event by New Hampshire Gov. Chris Sununu, a fellow Republican. To answer Democratic criticisms that a voluntary initiative would not be financially viable because the risk pool would be too small, the two governors pitched a bi-state program that would automatically enroll a combined 18,500 state employees.

Scott has opposed imposing a new payroll tax and has argued that a voluntary plan would be more affordable. He said Wednesday that his would cost enrolled Vermonters about “a buck a day.”

But according to Moore, the Democratic plan would cost less per worker than the governor's — roughly 70 cents a day for a median income earner — and offer more pay for twice as long. She chalked up some of the savings to the public administration of the program, through the state Department of Labor.

“I think the whole premise of the governor's plan has been, ‘We can do this and make it more affordable,’” Moore said. “But from our perspective, we’re saying ‘Well, we have a more robust program that covers all Vermonters and is less expensive than your benefit.'”

Moore said that state-run family leave programs are already working well elsewhere, including in California, Washington and Rhode Island. “The legislature’s been in contact … with other states with programs of this nature to discuss how they’re administered, how many staff are needed, so we have a lot of successful models that we can look to,” she said.