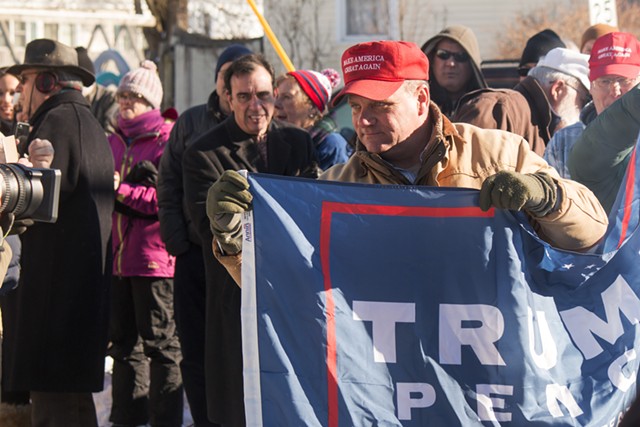 Gus Klein strode through the crowd assembled in his New North End front yard Saturday, followed by a bagpiper in a MAGA hat. Klein proudly carried a new Donald Trump sign to a flagpole that had duct tape around it.

The charred, tattered remains of Klein’s original “Trump 2020” flag were still hanging atop the pole. It had been burned one November night by two girls, ages 14 and 15.

Klein attached the desecrated flag’s still-creased replacement to the pole and hoisted it up. Several people who spoke Saturday at Klein's North Avenue home called that a courageous act of defiance. They said they regarded the vandalism as a demonstration of the intolerance and un-American impulses of Trump’s opponents.

“You know why I call this [event] ‘almost sacred?’” 2018 U.S. Senate candidate Lawrence Zupan asked halfway through an hourlong set of speeches. “Because today is a reaffirmation, a reclaiming and a repossession for Gus and for [his wife] Annmarie, as well as a witness to each and all of us, of their unalienable rights to life, liberty, the pursuit of happiness, the First Amendment right to free speech, and the sanctity of their private property.”

Zupan was just getting started.

The ceremony was made possible by the president’s son Eric, who saw a national news story about the destruction of Klein’s original flag. He tweeted out a promise November 28 to send a new one, then followed it with another tweet to confirm that Klein's replacement was in the mail.

The flag didn’t arrive. Klein told Seven Days that he suspects porch thieves or someone who saw those tweets "intercepted" it. But the Trump campaign mailed several more flags, plus some T-shirts and drink koozies, Klein said.

“It was perfect,” he said. “There again, they take this opportunity for people like us within the community to send the message out that Donald J. Trump is the man for 2020. Promises made, promises kept, and that’s what it’s always about.”

The event drew roughly 100 people. Many parked at a school across the street.

The ceremony doubled as what Rick Cochran, the GOP committee chair in Caledonia County, called “the official kickoff, if you will, for President Trump’s reelection in Vermont.”

Trump garnered just 30 percent of Vermont's votes in 2016, a figure Cochran misstated as 33 percent and told the crowd was a “pretty good” showing.

Remarks began with a speaker reading from a letter signed by Trump 2020 campaign manager Brad Parscale and Eric Trump's wife, senior consultant Lara Trump: “The Trump flag flies high again in Burlington, Vermont, all because of you. But this wasn’t easy. You are gathered here while others resist. You stand shoulder to shoulder together while others obstruct. Above all, you answer vandalism with patriotism.”

Some attendees pushed $20 bills into a plastic jar to get an unofficial T-shirt that depicted the president hugging an American flag. Others signed a petition to be sent to Vermont’s congressional delegation in support of border wall funding.

Zupan, who received 27 percent of the vote in his 2018 challenge of Sen. Bernie Sanders (I-Vt.), suggested that the flag vandals had been “confused by the voices who deliberately blur the otherwise sharp distinction between legal and illegal immigration” or “persuaded that a president who doesn’t let anybody cross over an unprotected border is a racist or a bigot.”

Another speaker, Republican activist Ellie Martin, criticized the parents of the teen vandals for not forcing their children to apologize to Klein directly.

“And that’s where you see the difference between who we are as patriots, versus the people that do this kind of act,” she said.

Just then, Martin was interrupted by an impeccably timed North Avenue driver who yelled, “Fuck that nigga Trump!” as he passed.

Those in the crowd ignored the shout.

A few minutes later, another driver slowed down in front of the ceremony and honked gently. Those in the crowd first waved, and then groaned as messages painted on the passenger-side windows came into view: "Trump Sucks" and "Racists Go To Hell." A Burlington police officer stationed across the street stopped the car and spoke briefly with the driver.

The ceremony may not have been entirely about Trump. As the crowd dispersed, Klein told Seven Days he is considering a run for public office himself.

“Burlington City Council needs individuals who are strong willed, strong minded and want to make change in the community and get things done for every member of the community,” Klein said. “Not just a certain party.”
Prev
Next