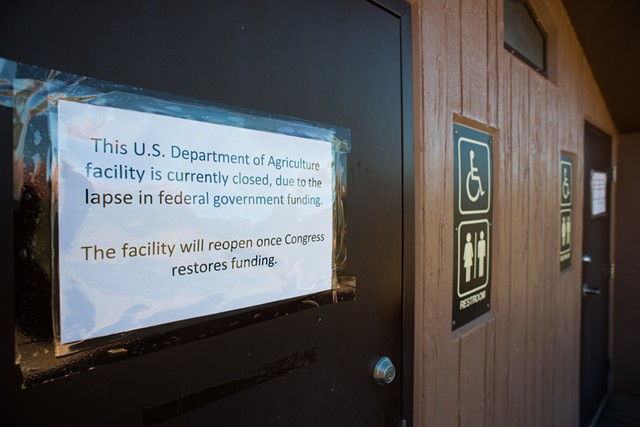 The partial shutdown of the federal government has left Vermont state workers scrambling to get food assistance to those who qualify for it.

The Vermont Department for Children and Families and the nonprofit Hunger Free Vermont found out Tuesday that they must process all applications for the federally funded 3SquaresVT program by January 15 and issue the benefits by January 20.

State employees are "making heroic efforts to make sure they can process everything they possibly can before the deadline," said Hunger Free Vermont executive director Anore Horton, who has been trying to educate families to make sure they file their paperwork on time.

When the government closed on December 21, the U.S. Department of Agriculture extended federal food assistance funding, known as SNAP, by an additional 30 days. But that cash, intended for February disbursements, must be paid to the 71,000 Vermonters who receive the benefits by January 20.

Horton encouraged families trying to renew or start their benefits to call the department and "stay on hold no matter how long you have to wait to get that done." The average allocation for a family with children is $364 a month, according to Horton.

In a press release Friday, the organization encouraged families to budget accordingly. If the shutdown persists, the federal program will not have money to offer March benefits for food assistance, Horton said. And if the funding stalemate lasts through February, "We’re going to be facing a real hunger crisis," Horton said.
SNAP is one of a host of programs and agencies affected by the gridlock in Washington, D.C. On Friday, the closure tied a record for the longest-ever government shutdown.

Workers at the Transportation Security Administration at Burlington International Airport were scheduled to miss their first paycheck on Friday, Vermont TSA director Bruce McDonald said. He's furloughed about half a dozen administrative staff, while transportation security officers, who are considered emergency and essential personnel, have now been working two weeks without pay.

McDonald met with his full staff Thursday and said morale was high. "They're just taking it one day at a time," he said. But the realities of the shutdown were setting in. At least one employee had started a GoFundMe campaign to make up the lost pay, McDonald added.

Rhode Island Public Radio reported Thursday that the Environmental Protection Agency's regional office in Boston is operating with 22 staff, down from the usual 516. That means the agency is not conducting routine air, water or wastewater inspections, or enforcing pollution violations. And Vermont's two national fish hatcheries are operating with reduced staff that must still care for thousands of fish and fish eggs, Vermont Public Radio reported.

Both Rep. Peter Welch (D-Vt.) and Sen. Bernie Sanders (I-Vt.) have said they'd forfeit their pay during the shutdown.

Walters: Welch Refuses Pay During Shutdown
By John Walters
Off Message
While craft brew is always on the menu in Vermont, hop-heads looking for new offerings might have to wait for that, too.

The Alcohol and Tobacco Tax and Trade Bureau, which must approve new beer labels, is closed during the shutdown. That isn't currently affecting things at Switchback Brewing, but it could mean delayed releases of new beers in the future, said plant engineer Gretchen Langfeldt.

Once the government reopens, the bureau will have to slog through weeks' worth of unprocessed label applications, Langfeldt said. "It could definitely slow down new releases for breweries into the springtime," she said.
Prev
Next