Sanders Apologizes to 'Mistreated' Women on His 2016 Campaign Staff 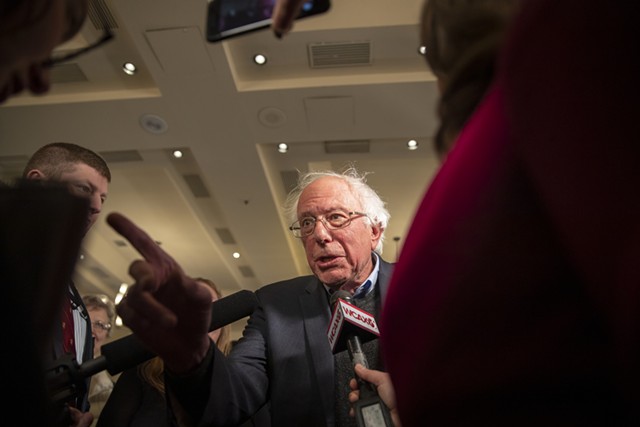 On Thursday, Sen. Bernie Sanders (I-Vt.) found himself again apologizing to women who worked on his 2016 presidential campaign.

“It now appears that as part of our campaign there were some women who were harassed or mistreated,” Sanders wrote in a message he tweeted out Thursday afternoon to his nearly 9 million followers. “I thank them, from the bottom of my heart, for speaking out. What they experienced was absolutely unacceptable and certainly not what a progressive campaign, or any campaign, should be about.”

In this instance, Sanders' apology followed a Politico report from Wednesday evening. According to the news outlet, the Sanders campaign's then-deputy national field director, Robert Becker, talked about his desire to have sex with a young campaign staffer before he forcibly kissed the woman at a Philadelphia bar in July 2016. Becker was also the “central target” of a discrimination claim made by two employees he oversaw in Illinois and Iowa. That federal complaint ended in a $30,000 settlement, according to Politico.

As recently as last month, Becker was in South Carolina organizing meetings with former staffers, the Washington Post reported. The Sanders camp, though, has said he’s not on the payroll.

“It just really sucks because no one ever held him accountable, and he kept pushing and pushing and seeing how much he could get away with,” the woman who alleged the sexual misconduct told Politico. “This can’t happen in 2020. You can’t run for president of the United States unless you acknowledge that every campaign demands a safe work environment for every employee and volunteer.”

The latest allegations come at a turbulent time for Sanders, who is weighing another run at the nation’s highest office in 2020. On Wednesday, longtime Sanders aide Jeff Weaver, who served as campaign manager during the 2016 run, said he wouldn’t reprise the role in the event of another presidential campaign. Rather, Weaver told CNN, he’d serve as “a strategic adviser that needs to deal with some of the 30,000-foot issues as opposed to the management of a day-to-day campaign."

And just last week, the New York Times reported that women who worked on the 2016 campaign experienced sexism, were paid less than male counterparts and were ignored when they reported unwanted sexual advances made by a Sanders surrogate on the campaign trail.

After the story came out, Sanders apologized on CNN to “any woman who feels like she was not treated appropriately” and said he wasn’t aware of the problems at the time.

"I was a little bit busy running around the country trying to make the case,” he said.

In his apology Thursday, Sanders admitted the campaign’s “standards and safeguards were inadequate.” He did tout the work done on his 2018 Senate reelection campaign, which “established some of the strongest sexual harassment policies in the country.”

During an unrelated event on Capitol Hill Thursday, Sanders told reporters that he had not been aware of the $30,000 settlement, according to the Post.
Prev
Next