As he began his second term Thursday, Gov. Phil Scott warned lawmakers that Vermont faces a demographic crisis that could cripple state government and diminish Vermonters’ way of life.

The state’s stagnant population and shrinking labor force, he said in his inaugural address, are “threatening every service we deliver, every program we administer and every investment we hope to make.” Without a different approach, he continued, “our current revenues won’t support our obligations, our wants or even our needs.”

Scott delivered his remarks to a joint assembly of the Vermont House and Senate after he and the state’s five other statewide officers swore their oaths of office. The 60-year-old Berlin Republican, a former state senator and lieutenant governor, won his second two-year term last fall.

After outlining the challenges he said the state faced, Scott spent much of his 32-minute address outlining his approach to solving them, focusing mostly on health, education, business and housing. Though he was light on specifics — as most governors are in their inaugural and state of the state addresses — he provided plenty of hints of agenda items to come.

To improve the state’s health and safety, Scott said, he would propose unspecified reforms to make health insurance more affordable, particularly for young people. He said he would seek immediate funding in the budget adjustment bill to test every Vermont school for lead within a year. And he said he would, in the coming weeks, unveil a voluntary paid family leave plan, “balancing the value of this benefit with Vermonters’ ability to pay.”

“Most experts believe that voluntary plans don't work,” Senate President Tim Ashe (D/P-Chittenden) told reporters. “The administration would be the first to come up with a voluntary plan that would work. The reason these are social programs is that they guarantee the benefits will be there when needed.” 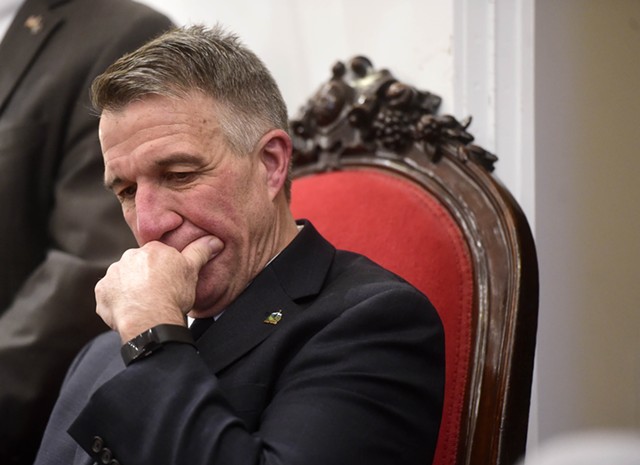 Lawmakers also reacted with skepticism to a pledge from Scott to fund the state’s massive clean water obligations with taxes already in place.

“When we talk about existing revenues, those revenues are dedicated to something,” House Speaker Mitzi Johnson (D-South Hero) said during her own post-inaugural press conference. “So it’s possible to do it within existing revenues but it means taking that money away from something else, so I want to know what it’s being taken away from in order to be put towards water. It’s a matter of priorities.”

Scott, who clashed repeatedly with the legislature during his first term over how to pay for the state’s schools, said he would again work to “transform our education system” and ensure that all students have equal opportunities. He spoke at length about two unnamed middle schools that feed into the same high school but offer widely disparate classes and programs to their respective students.

“This is not an isolated case,” he said. “It’s happening across Vermont, so we must continue to address the inequality that exists.”

To do this, Scott said, Vermont should focus on early education. He said he had identified “a new revenue source to put toward these initiatives” and pledged to outline it in his budget address, which is scheduled for later this month.

Unlike his immediate predecessors, Scott has largely avoided promising to bring broadband internet coverage to all corners of Vermont. But he told lawmakers Thursday that he would advance a proposal to at least “expand access” to broadband.

He also said he would work with them to modernize the state’s nearly 50-year-old land-use law, known as Act 250. After spending 18 months studying its impact on development and the environment, a committee of lawmakers is poised to issue a final report with its own recommendations.

Scott did not disclose what his reforms would entail, but he said they would “encourage more compact development while preserving our working lands and rural character.” 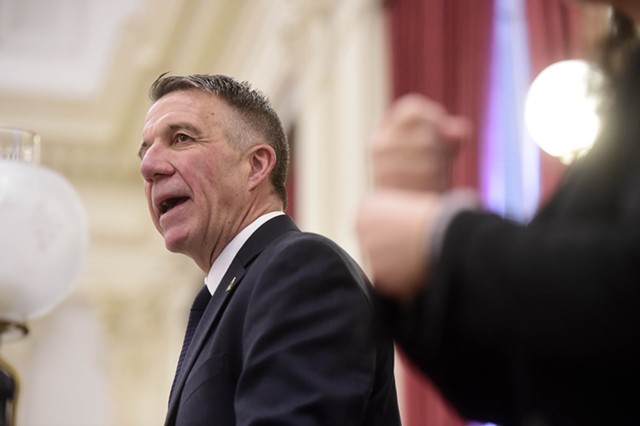 Two years after he and the legislature agreed on a $35 million bond to construct new housing, Scott said he would “build on that progress by focusing on existing stock and rental units.” He said he would also propose a “labor force expansion package” to encourage people to move to Vermont.

Though Scott painted a gloomy picture of the state’s demographics, he spoke optimistically about Vermonters’ ability to rise to the challenge. And despite significant tension last term between the governor and legislature, Scott noted several instances in which they worked together.

Citing a July 2017 press conference during which he, Ashe, Johnson and the state’s left-leaning congressional delegation stood together to support the Affordable Care Act, Scott said, “Where else but Vermont would you see such a politically diverse group joining together to defend access to healthcare?”

Now that Democrats and Progressives hold super-majorities in both the House and Senate, Scott will have to find opportunities for more such collaboration — and he pledged Thursday to seek it.

“As we open this new biennium, with the hope and promise of a new year, let’s commit to this work, put aside our differences to work together, to come together,” he concluded. “To solve problems and help people each and every day.”

After the speech, Ashe and Johnson said they welcomed its tone, but they said they would wait to see whether Scott would engage with the legislature or issue as many vetoes as he did in his first term: 14.

“I appreciate the olive branches, and I’ll know that that is moving forward when we invite his staff into committees and they come to the table and participate with us to help … find solutions and help people,” Johnson said. “That’s the piece that’s gonna make me know that, yep, we’re in a different place.”

“The worst way of governing is by threatening vetoes or threatening to override vetoes,” Ashe said. “[The super-majority] allows the legislature a little breathing room but doesn’t diminish the need to find common ground.”