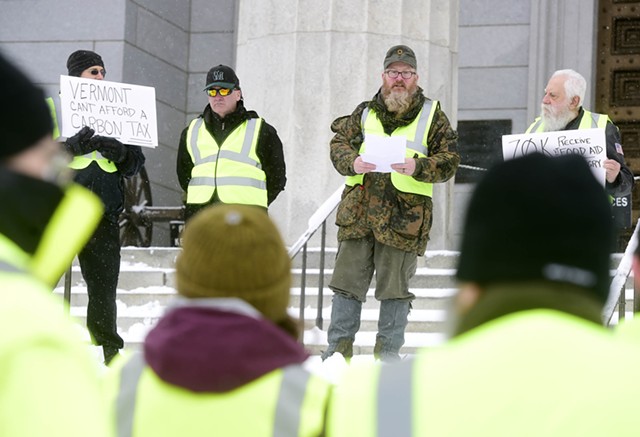 As the Vermont legislature opened its new session Wednesday, several advocacy groups made their presence felt in the Statehouse.

About 50 members of No Carbon Tax Vermont, a new group opposed to carbon pricing as a way of combating climate change, gathered in the Statehouse for a rally featuring multiple speakers. Participants wore bright yellow safety vests, a visual echo of the orange-vested gun-rights supporters who were so prevalent during the 2018 gun legislation debate.

In fact, many leaders of that movement are now active in No Carbon Tax Vermont — such as the rally's emcee, J.T. Dodge of Newbury, who is also cochair of the pro-gun Vermont Citizens Defense League. Dodge said the group's get-up wasn't inspired by protesters in France, who have also donned yellow vests.

Participants first gathered on the Statehouse steps but moved the rally indoors because of the wet, snowy weather. Dodge opened the proceedings by insisting that the group is nonpartisan — "It's not about parties or politicians. It's about us!" he said. But most of the speakers represented conservative interests and often criticized the left-leaning legislative majority. Dodge said that an unnamed Democratic lawmaker had been invited to speak but had declined.

"The carbon tax is a corrupt stew of bad politics and bad policy," said Rob Roper, president of the conservative Ethan Allen Institute. "Despite that, it seems to come back every year."

House and Senate leadership have expressed no interest in bringing any carbon-pricing legislation to a vote. But Dodge warned against complacency. "When I talk about a carbon tax, I mean all the proposals and tricks they'll come up with," he told the group.

The other side of the debate could be found at an early afternoon event held by the Vermont Youth Lobby, a group of teens focused primarily on climate change. Orielle Koliba, a senior at Harwood Union High School, said that "carbon pricing" is the group's top priority, but it seeks wide-ranging action including development of renewable energy, weatherization programs for homeowners and electrification of vehicles.

"My family moved to Vermont for its natural beauty and progressive values," said Hope Petraro, a junior at Montpelier High School. She urged lawmakers to protect the environment with progressive legislation.

Max Sabo, a senior at U-32 High School, pointed to the teen gun control activists of Parkland, Fla., as an inspiration for the Youth Lobby and an example that young people can make their voices heard.

Related We the Young People: Seven Vermont Teens Who Are Making a Difference

We the Young People: Seven Vermont Teens Who Are Making a Difference
By Sasha Goldstein, Ken Picard, Katie Jickling, Sadie Williams, Rachel Elizabeth Jones, Kymelya Sari, Dan Bolles and Taylor Dobbs
Politics
Also on Wednesday, a number of progressive advocacy groups including Rights & Democracy, Migrant Justice, the Vermont Natural Resources Council and 350.org, came together for a People Power Lobby that included sessions on top legislative priorities and how people can make their voices heard. About 100 of them listened to talks by several freshman lawmakers who outlined their priorities and urged activists to stay engaged.

"We are only as good as the voices in this room and in our communities," said Rep. Emilie Kornheiser (D-Brattleboro).

Her Windham County colleague, Rep. Nader Hashim (D-Dummerston), is a state trooper; his remarks focused on criminal justice reform and anti-poverty efforts. "The bail bond system needs to change," he said. "We need to reduce the prison population." He also said that he is sponsoring legislation to prohibit the construction of private prisons in Vermont — an idea that was mooted by Gov. Phil Scott last year as a way to expand and modernize the corrections system.

Newly installed Sen. Andrew Perchlik (D/P-Washington) spoke of being moved by hearing remarks in Spanish during the Senate's opening session. "If our state is to prosper, we have to be more welcoming," he said. As Perchlik spoke, two people in the front row of the audience offered whispered translation to two Spanish-speaking attendees.

All the groups that held gatherings Wednesday vowed to be back at the Statehouse promoting their agendas. "We're here, asking Vermont to step up," Dodge told his crowd. It was probably the only thing on which he and his progressive counterparts would agree.

Correction, January 10, 2019: A previous version of this story mischaracterized the political leanings of some members of No Carbon Tax Vermont.
Prev
Next