by Taylor Dobbs and Kevin McCallum

Following a wave of retirements last year, Johnson appointed new chairs to seven of the House's 14 standing committees, including those with jurisdiction over education, energy, natural resources, commerce and housing.

"I'm disappointed but looking forward to the new challenge," said Brennan, whose consolation prize is a seat on the influential House Ways and Means Committee.

Johnson said that this year's high turnover made it unusually difficult to dole out committee assignments to the House's 150 members. Thirty-nine are either rookies or returning to the Statehouse after a hiatus. That number is expected to grow when Gov. Phil Scott fills two vacant House seats.

Wednesday's winter storm delayed proceedings in the Senate by nearly an hour as the 30-member body waited for Sen. Jeanette White (D-Windham) to make her way north from Putney. When Lt. Gov. David Zuckerman, who presides over the Senate, called the roll, White answered “Here, finally!” to understanding chuckles from her colleagues.

After his colleagues reelected him to a second two-year term as pro tem, Ashe welcomed the Senate's five freshmen by paying homage to those they replaced and the spirit with which they served, which he called unique in today’s toxic political discourse.

“I think the reason we’ve been able to work so well together and with such a positive culture is that when you serve in the Vermont Senate, you look at each other as people first, and political foils, rivals, is not something that enters into our vocabulary here,” he said.

Ashe then returned to a theme he explored two years earlier, when he was first elected pro tem: that there are "two Vermonts." One, he said, is well-educated, relatively secure and able to enjoy the food, culture and recreation for which the state is known. The “other Vermont,” he said, struggles to overcome the loss of manufacturing jobs, grapples with substance abuse and mental illness, or toils away at minimum-wage jobs paying $10.78 an hour.

That last item presaged what is sure to be another push to boost the state’s minimum wage to $15 per hour — a measure Scott vetoed last year.

“To put it simply, the people who live in this other Vermont can only dream of a life without economic anxiety,” Ashe said. 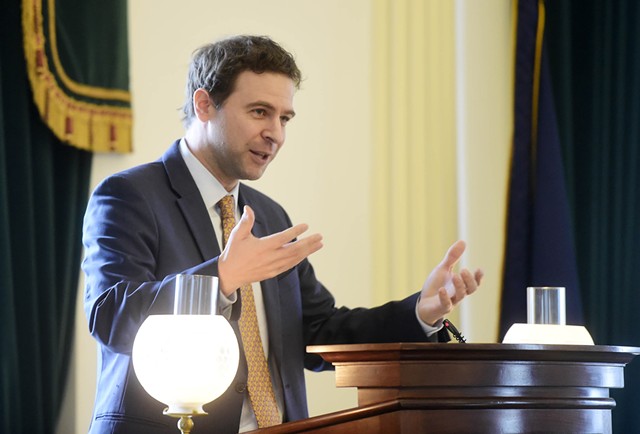 Instead of focusing on “the new shiny object” of the day, such as issues pushed by lobbyists or latched onto by the media, Ashe challenged his colleagues to take a broader view and always work to answer one question. “What can we do to improve life in the other Vermont?” he said. “Answering this question is all of our jobs and touches on almost every policy area we’re working on.”

Johnson touched on similar issues in her own opening remarks, arguing that "too many Vermonters are struggling to care for themselves and support their families." She cited paid family leave and minimum wage increases as key priorities.

"Each of these policies support local households and strengthens our collective economy for a better Vermont," she said, adding that she was particularly worried about the state's "rural-urban divide."

Johnson acknowledged the departure of former representative Kiah Morris, a Bennington Democrat who dropped out of her race for reelection last year and resigned from the House, citing racial intimidation in her hometown.

“We will miss her voice," the speaker said. "I hope you will join me this session to embrace civility, inclusivity and respect. We have much to do to ensure that all voices are at the table in the crucial discussions we have and to carefully look at the rules and systems of our society to make sure that they are equal and just.”

“You have a vital role in a bringing a range of perspectives to the table,” Johnson told Republicans from the podium. "I’m committed to working together to make sure that all voices are heard. We cannot lead this state without you.”

Though Johnson removed Brennan from her leadership team, she added another Republican. Rep. Michael Marcotte (R-Coventry) will take over the House Commerce and Economic Development Committee.

McCoy said she was surprised that Johnson stripped Brennan of his post but added that she was glad that another Republican had attained a chairmanship.

“She took some of my suggestions which I appreciate. Other ones she did not, [and] I respect that," McCoy said of Johnson. "She is the speaker. I think we all know what issues and challenges that Vermonters face. It’s just, how do we get there?”

The Senate elected Sen. Dick Mazza (D-Grand Isle) to the three-member Committee on Committees, which doles out that body's chairmanships and committee assignments. Ashe said he expected those to be announced by Thursday afternoon.